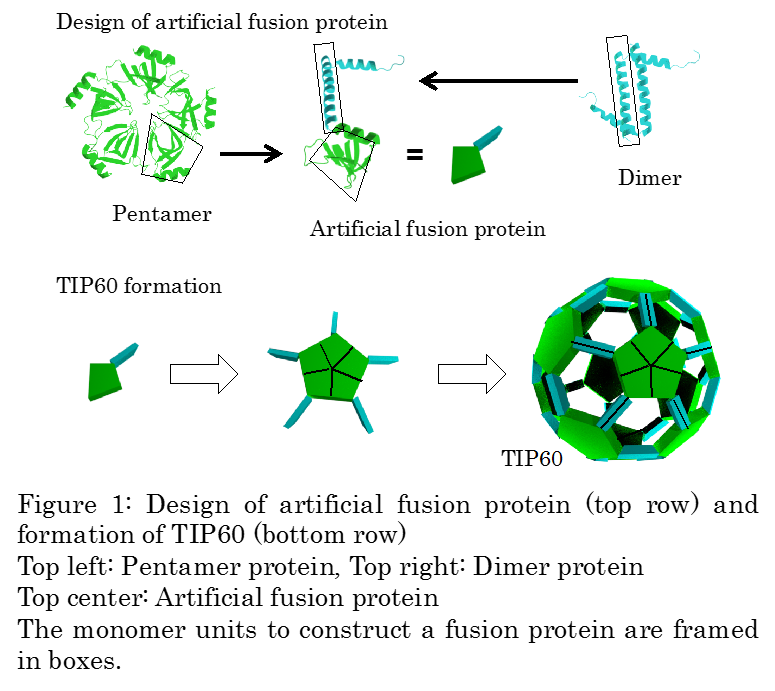 Summary:
A research team including Assistant Professor Norifumi Kawakami and Professor Kenji Miyamoto at Department of Biosciences and Informatics, Faculty of Science and Technology, Keio University, and Associate Professor Ryoichi Arai at Department of Applied Biology, Faculty of Textile Science and Technology, Shinshu University successfully constructed a soccer ball-shaped protein nanoparticle called “TIP60” through self-assembly of building block protein molecules. TIP60 is a homogeneous hollow spherical supramolecule with about 22 nm diameter. Thus it is possible to introduce small organic compounds into the internal cavity of TIP60. Moreover, TIP60s can be assembled into construct larger complex structures. Therefore, TIP60 is expected to contribute to the development of nanotechnology such as utilization as drug-delivery nanocapsules and use as nanobuilding blocks for creating nanomaterials with new molecular structures. This paper was published in the September 17 issue of Angewandte Chemie International Edition.

3. Research results:
Protein nanoparticles that self-assemble from 60 artificial fusion proteins were designed. As shown in Figure 1, the pentagonal pentamer proteins (top left) and dimer proteins (top right) are artificially connected (top center). It is designed such that 60 of these artificial fusion proteins created by connecting the two types of proteins self-assemble with each other, finally becoming a soccer ball-shaped nanoparticle. When these artificial fusion proteins were purified and observed under an electron microscope, as well as through small-angle X-ray scattering analysis, it was found that nanoparticles with diameters of about 22 nm had formed as designed. The soccer ball-shape is a polyhedron called a truncated icosahedron, and this nanoparticle formed through the assembly of 60 artificial fusion proteins was named Truncated Icosahedral Protein of 60-mer fusion protein (TIP60).
As shown in Figure 1, TIP60 has an internal cavity and a large number of openings on its surface. In fact, when small compounds were added from the outside, they entered the internal cavity and chemically modified its inner surface. There are expectations of applying this characteristic of TIP60 to drug delivery systems.
In addition, another property of TIP60 is that it has negative charges as a whole, and by adding a material with a positive charge to it, TIP60s are further aggregated. Analysis of the aggregation process revealed that TIP60s do not randomly clump together, but follow certain rules. There are expectations that this could be used in the future to construct much larger molecular structures.

4. Future development:
At present, the researchers succeeded in chemically modifying the inside of TIP60. If they can further construct a mechanism that can freely take out small molecules introduced internally, it will become a useful drug delivery capsule. Furthermore, the property of TIP60 to assemble systematically will lead to the possibility to construct materials as designed in the range of about 100 to 1000 nm, which are difficult to produce by conventional methods. It is expected to become a next-generation molecular material.