Associate Professor Akiko Kitamura of the Faculty of Arts is a dancer, choreographer and director studying the body as media. She has produced shows around the world, winning awards along the way and studies traditional Asian martial arts and dance with analysis through body theory, production theory and dance theory. She organized the “Virtual Gallery Talk” entitled, “Living in the taiga forest – with reindeer, with spirits” hosted by the Faculty of Arts, held online on Sunday, July 26th with guest teachers Mikiya Nishimura, a specialist in Mongolian culture and President of the NPO SHAGAA, and Seiji Murao, an anthropologist at Seisen Jogakuin College of Nagano city. Shinshu University’s various faculties regularly hosts events open to the public free of charge.

Abiding to social distancing practices in place, Nishimura sensei logged on from Osaka where he had been staying with guests from Mongolia who could not return to their homeland due to the ongoing pandemic. He participated in the talk before returning home to Hokkaido. More than fifty people including former tour participants of Nishimura sensei joined the online gallery talk to listen to him speak on his fieldwork experiences living with the reindeer herders called the Dukha (or Tsaatan in Mongolian), a Tuvan minority living in the taiga of Mongolia. Nishimura’s fieldwork spans almost 30 years, which has allowed him to observe the significant changes the Tsaatan have endured over the years. There are just 30 to 45 Tsaatan households (300 to 500 people) living near Lake Khövsgöl, 200km from the southern tip of the famous Lake Baikal of Russia.

The taiga is an iconic landmass that covers 17% of land in the world and has trees growing in some of the highest latitudes on Earth, harboring long winters and high precipitation. The taiga hides a permafrost beneath the ground, of which the “perma” component has unfortunately proven not to be so permanent after all; the icy soil has been melting during recent high temperatures.

The first part of the talk began with an introduction to the reindeer by Nishimura sensei with a slide show of many photographs of the Tsaatan and reindeer taken over the years. The audience was able to enjoy photos of some of the most remote parts of the world from the comfort of their own homes due to the “virtual gallery talk”. The Tsaatan rely on reindeer mostly for their milk and to carry their rather few possessions on them as they roam the taiga. The Tsaatan were a nomadic, hunter-gatherer people before the country of Tuva formed a century ago. When borders were drawn, some of the Tuvan-speaking people were now on Mongolian land. The regime forbade them from hunting, paying them a salary to herd reindeer instead. However, things changed again after the fall of the Soviet Union. They could no longer receive a salary for keeping reindeer, and reverted to their nomadic hunter-gatherer ways, selling fur and other animal goods to buyers from China. In recent years, tourism organized by the city-dwellers from Ulaanbaatar for tourists from overseas to experience the reindeer nomadic life has become popular. This has provided the Tsaatan with some income, but not before this new circumstance forced them to change their inclination to provide hospitality without compensation.

The second part of the talk included questions from anthropologist Seiji Murao who played a role in introducing Associate Professor Kitamura to Nishimura sensei in order to connect her to the Shamans of the taiga. Shamanism of the Tsaatan is said to be one of the oldest remaining styles in-practice by nomads, and Associate Professor Kitamura was planning to conduct fieldwork on the physical movement aspect of Shamanism before her plans were put on hold while COVID-19 prevention measures are in place. Nishimura sensei shared photos of a shaman who was 104. She wobbled as she walked in daily life but during the ceremony convening with spirits she banged the drum, sang and danced continuously for two or three hours.

With the current inability to travel, the online audience hung on to every word of the two hour talk about reindeer, hunting practices of the nomadic people of the Mongolian taiga and their Shamanism. The hosts extended the event half an hour to answer questions received from the group call chat function. Please check our Japanese website for announcements about future events.

For more information on Mongolia and Mr. Nishimura’s activities:
https://www.youtube.com/channel/UCk3IydLCL5icETd7ku05fRQ

Reindeer fur is like straw, trapping air inside to keep their body completely insulated. They are built for the cold and cannot handle heat. Their hooves are unique too, opening and closing, allowing them to walk on swamplands which horses cannot.

Both females and males grow antlers. Blood flows through the antlers that are coated with soft fur. In the winter, the males’ antlers fall off after the blood flow stops and the antlers become very hard. The reindeer need their antlers to regulate their temperature during warmer climates. 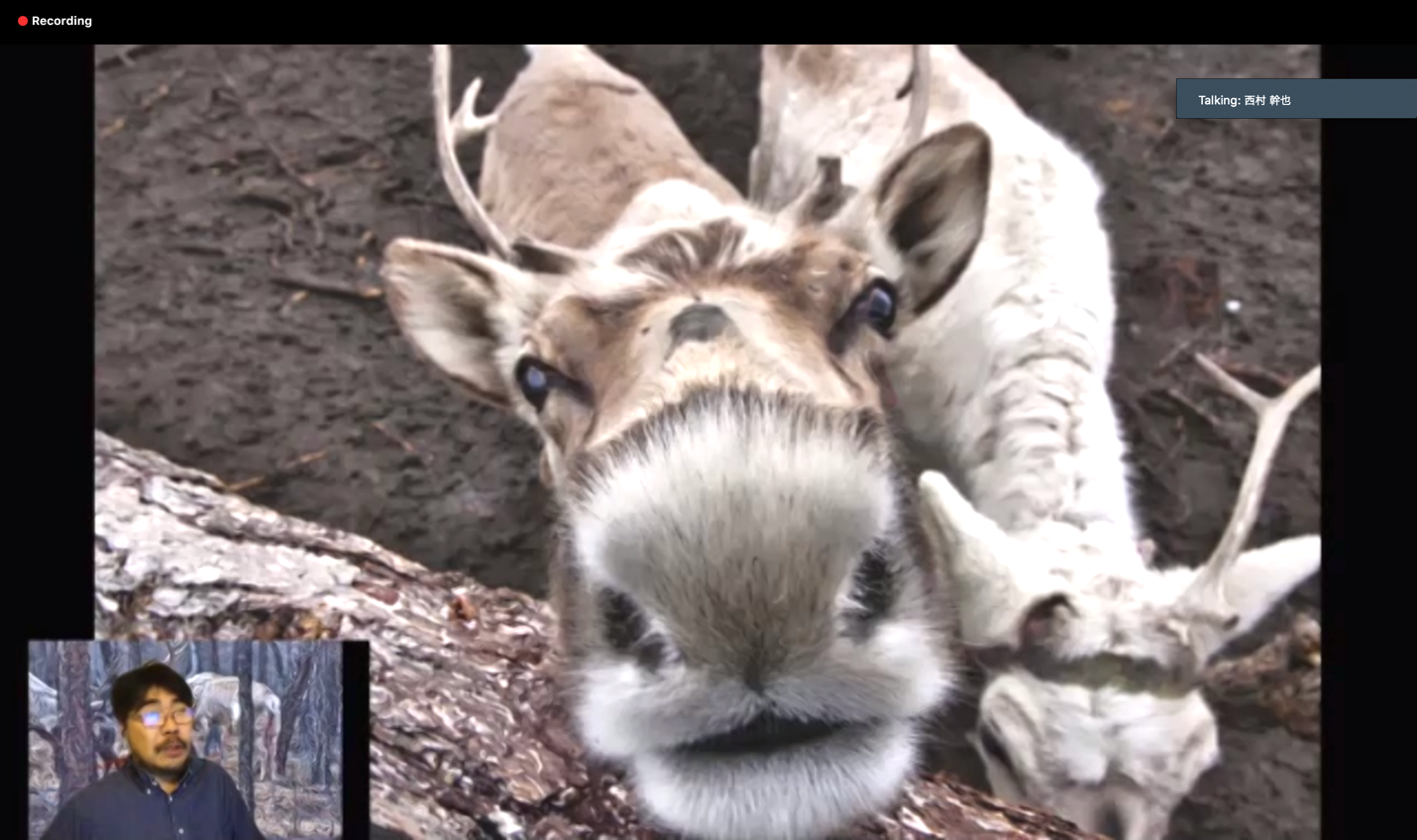 Nishimura’s friend who owned the most reindeer in Mongolia was once asked by a radio interviewer how he would describe reindeer. The friend replied, “they aren’t thinking of anything, absolutely nothing”. After spending a lot of time with the reindeer himself, Nishimura understood what his friend meant. They are the gentlest of animals. They don’t fear humans at all, which makes them vulnerable to poachers. They willingly approach humans because they crave salt. Humans have salty skin and urine. 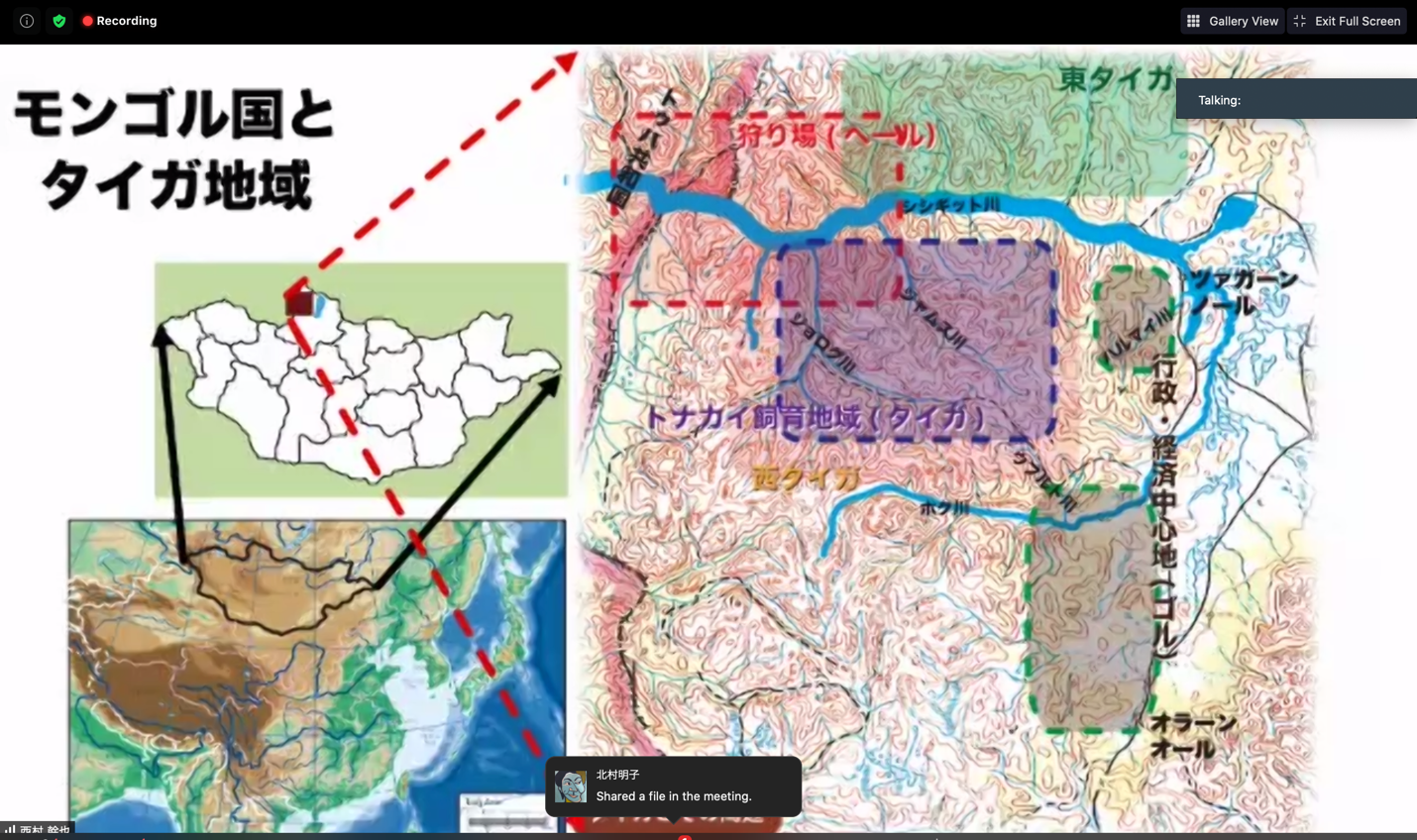