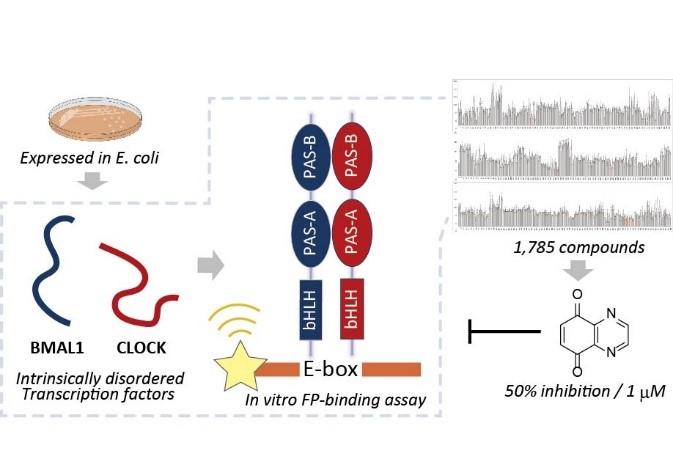 BMAL1 and CLOCK are transcription factors that play a key role in mammalian circadian rhythms. BMAL1 and CLOCK regulate the metabolic rhythms of living organisms, including ATP production, cell proliferation, and digestive organ function. During the day, when these two proteins combine and specifically bind to the E-box DNA sequence, transcription of the genes for the proteins Per and Cry is activated. At night, when Per and Cry accumulate in cells dimerize and bind to the BMAL1 / CLOCK complex, transcriptional activity is inhibited and production of Per and Cry is stopped.

Circadian rhythms are based on this DNA transcription-translation feedback loop mechanism, and recent studies have shown that disrupted cycles can cause insomnia and tumorigenesis. Therefore, compounds that control the conjugation of BMAL1 and CLOCK and DNA binding are expected to have potential as therapeutic agents for these diseases, but there have been no reports of inhibitors to date, let alone drug discovery research. One of the reasons is that BMAL1 and CLOCK are intrinsically disordered proteins (IDPs) that do not have a fixed structure in vivo, which makes experimental operation difficult.

Professor Junko Ohkanda of the Academic Assembly School of Science and Technology Institute of Agriculture and 2nd year master's student at the same graduate school Yusuke Hosoya, together with Professor Isao Kii, and a team of researchers from Kyoto University and Hokkaido University were able to develop a compound that inhibits the transcription factors that control the day and night circadian rhythm of mammals.

In this study, the domain considered to be important for complexation and DNA binding was expressed and purified from E.coli of the full-length BMAL1 and CLOCK, and the complex formation of both and specific binding to the E-box DNA sequence were simplified. The team succeeded in establishing a fluorescent polarization test system that can be detected quantitatively. As a result of screening a library of 1785 compounds using this test system, they were able to find a compound that strongly and selectively inhibits the DNA binding between BMAL1 and CLOCK. Interestingly, the mechanism of action was suggested to be irreversibly bound to the PAS domain of BMAL1, suggesting that it may be useful as a covalent inhibitor of BMAL1 / CLOCK.

As described above, this study is significant in that it shows that the fluorescence binding test system using IDP protein is useful for the efficient search for IDP inhibitors, which had been considered difficult drug discovery targets in the past.

This study was published on the Back Front Cover of Chemical Communications.
https://pubs.rsc.org/en/content/articlelanding/2020/CC/D0CC04861E#!divAbstract