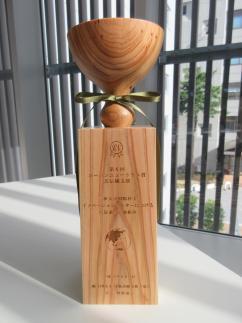 The International Center for Science and Innovation at Shinshu University (AICS) has been awarded the 6th annual Carbon Neutral Prize for the Hokuriku/Koshinetsu region. The award recognizes outstanding accomplishments in the mitigation of global warming and the realization of an eco-friendly "Low Carbon Society" through the reduction of emissions of greenhouse gases such as carbon dioxide.

In accordance with its commitments under the Paris Agreement, which became effective in 2016, the Japanese government aims to reduce greenhouse gas emissions by 26% in FY2030 (compared to FY2013), and the construction and housing industry is expected to play an important role in implementing this policy. To promote awareness of the necessity of creating a low carbon society, the Japanese Association of Building Mechanical and Electrical Engineers (JABMEE) began awarding prizes annually in FY2012 in order to recognize eco-friendly facility planning and outstanding performance in building operation.

The AICS was established in 2015 as a research base for the "Global Aqua Innovation Center for Improving Living Standards and Water-Sustainability". The abundant groundwater of the area is used as an energy source for the air conditioning system, cooling the air in summer and warming it in winter. It is also used to melt any snow which accumulates on the solar panels and as general service water, for example, in toilets.

The AICS building is powered by the solar panels covering its entire surface area, and the electricity generated is made available through a Fuel Cell system. Waste heat from the fuel cells is also used in the air conditioning system and to melt snow. These innovations, along with the automated ventilation system and the insulation provided by the double skin of the exterior walls, have made it possible to reduce carbon dioxide emissions to approximately half those normally produced by a similar-sized research building. The University is proud that this example of its commitment to combat climate change has been recognized in the awarding of the Carbon Neutral Prize.