A research report on screening for cognitive decline in citizens’ motor examinations by Hikaru Nishimura, an occupational therapist in the Rehabilitation Center of Shinshu University Hospital, was published in the international science journal, Scientific Reports. 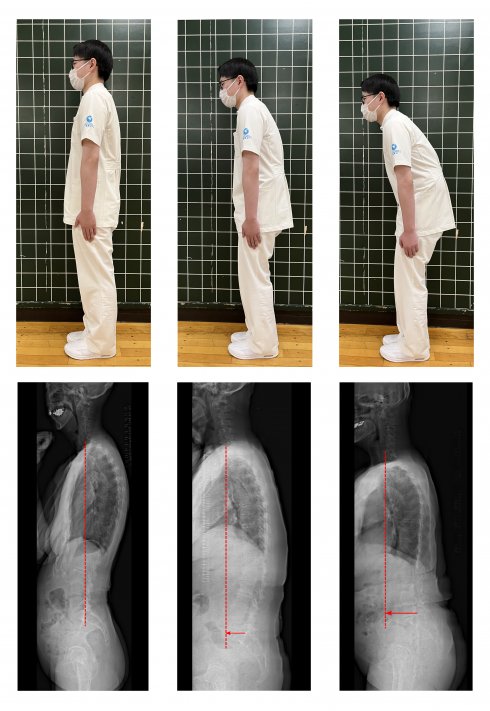 The posture of the spinal column assessed by the examination. The left shows a balanced front-back posture of the spinal column, while the center and the right are in the upper body forward to the pelvis, and the center of gravity ahead. The center of gravity tends to move forward in the elderly. By evaluating this, it is possible to detect a mild decline in cognitive function.

Since 2014, the Department of Orthopaedic Surgery of Shinshu University School of Medicine, and the Rehabilitation Center of Shinshu University Hospital have collaborated with the town of Obuse and New Life Hospital to conduct "the Obuse study", an epidemiological study based on the motor function examinations of the citizens. Occupational therapist Hikaru Nishimura, a member of the spine research group of the Obuse Study, together with Senior Assistant Professor Shota Ikegami of the Department of Rehabilitation Medicine, Professor Jun Takahashi of the Department of Orthopaedic Surgery, and others, conducted a screening of cognitive function decline by assessing spinal sagittal balance based on a radiological approach in the examinations of the citizens aged 50 to 89 years old. The result was reported in the international journal Scientific Reports (Impact factor 4.379).

Mild cognitive impairment is a stage between healthy and dementia and is estimated to occur in 10-20% of the elderly. Because this condition can be reversible to its original state, identifying whether a person has mild cognitive impairment is important for preventing future dementia. The spine research group of the Obuse Study has shown in previous studies that motor function decline occurs along with cognitive decline in the elderly and that motor function decline is manifested as changes in posture, leading to the hypothesis that it may be possible to screen for cognitive decline by detecting postural changes specific to the elderly and found that this hypothesis was correct.

Cognitive decline in the elderly is considered to be an element of "frailty", a condition unique to the elderly in which they tend to lose their health and require nursing care, in combination with the decline in physical function and loss of social roles that occur at the same time. Based on the results of this study, the spine research group of the Obuse Study hopes to use the results of this research to help prevent future required nursing care by identifying frailty at an early stage through postural examinations of citizens and providing appropriate intervention.

Title of the report and Authors:

Title: Detection of cognitive decline by spinal posture assessment in health exams of the general older population. (Sci Rep. 2022 May 19;12(1):8460.)