Natural disasters including severe flooding have been hitting many places in the world and causing extensive damages; the 2011 earthquake and tsunami in Japan is outstanding. Even with the piles of research on natural disasters, disaster risk reduction is still a big global issue. Post-disaster reconstruction efforts have not worked well against population decline and devastation in the communities, which resulted in far more aging and shrinking population. Actually, 40% of the redeveloped land on stricken areas remain vacant, where large-scale construction for housing restoration was undertaken for 10 years after the 2011 earthquake.

Misato Uehara, associate professor of Research Center for Social Systems / Graduate school of Agriculture, Shinshu University, has adopted the design science method by Ian McHarg*, and conducted an assessment in the striken areas for 10 years to evaluate the disaster prediction and reconstruction. A reconstruction plan in Shinchi town, Fukushima, by his team, specified areas at lower-risk and established the housing designs by 2015, which realized the population recovery. It was one of the rare successful cases of reconstruction after the earthquake. 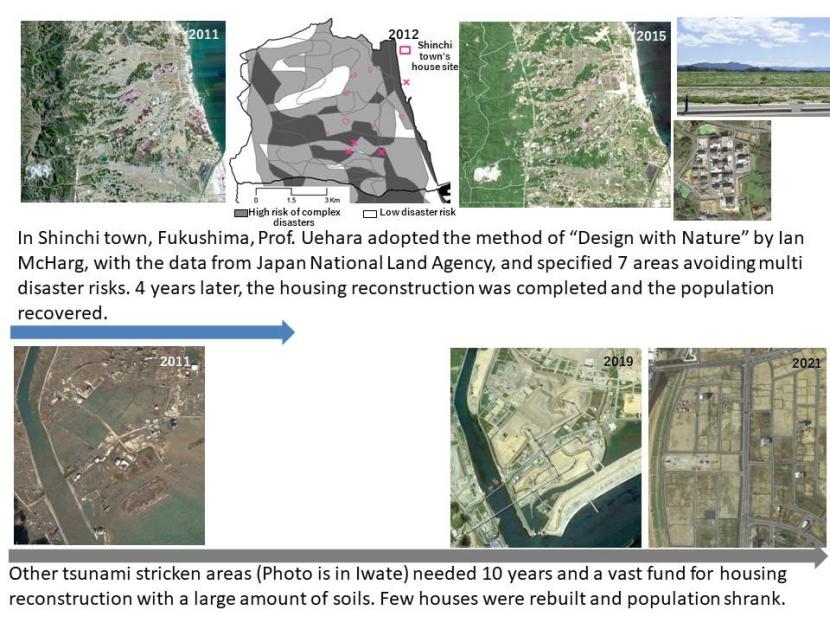 Professor Uehara, collaborating with assistant professor Yuki Arai, has launched a project to build a global online platform to share the 10 years research analysis and experiences on the earthquake, and to promote interactive research. The project received “Japan Prize” by Japan Prize Foundation, an award for the research which contributes to global peace and human prosperity. With the platform, they will share the experiences of the residents and local government staff in the striken area, and the issues to be solved. They are to collaborate with international institutions such as United Nations, IUCN (International Union for Conservation of Nature and Natural Resources), and IFLA (International Federation of Library Associations and Institutions).

*Ian McHarg: A Scottish landscape architect and the author of “Design with Nature,” who received “Japan Prize” in 2000.

For further information, refer to The Japan Prize Foundation.