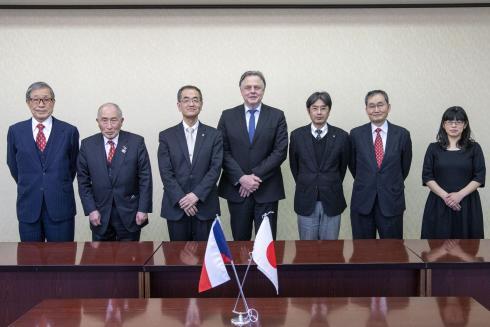 Ambassador and Plenipotentiary of the Czech Republic to Japan, Martin Tomčo, paid a visit to President Hamada during his stay in Matsumoto City in March of 2021. Shinshu University's Faculty of Textile Science and Technology has signed an interfaculty agreement with the Faculty of Textile Engineering, Technical University of Liberec of the Czech Republic, and researchers have been collaborating for 10 years.

The Czech Republic celebrated its 100th anniversary of friendship with Japan last year, and Ambassador Extraordinary and Plenipotentiary of the Czech Republic to Japan, Martin Tomčo spoke of the range of activities expanded from the exchange of culture and art to the education field, especially in the field of science and technology. The Czech Republic is collaborating with NEDO (New Energy and Industrial Technology Development Organization) in Japan, and 150 years have passed since the Czech Republic writer Dr. Karel Čapek introduced the word "robot" to the world. Now, a new style of collaboration is being created with Japan, such as holding lectures on the theme of AI in a webinar format. The year 2021 is being emphasized as the year of Czech Science, Education, and Innovation. Ambassador Tomčo said that if circumstances permit, representatives of 50 universities, including the Technical University of Liberec, will come to Japan and participate in various exchanges.

President Hamada spoke of having visited the Technical University of Liberec and having signed an inter-faculty agreement when he was a Dean of the Faculty of Textile Science, and a pioneer company of nanofiber manufacturing equipment is in the Czech Republic. During the talk, President Hamada spoke of the Erasmus Program and how the unique program allowed graduate students in the field of Kansei Engineering to deepen their learning through exchanges.

More than 270 Japanese companies have a branch in the Czech Republic, which is the highest rate of Japanese companies in the EU. There are high expectations for classes in English and technology transfer as a university that ranks in surveys conducted overseas. There was a friendly discussion regarding expectations for various exchanges with the university with Mr. Kubota of the Smetana's Litomyšl Society and other participants, who created the opportunity for the meeting. 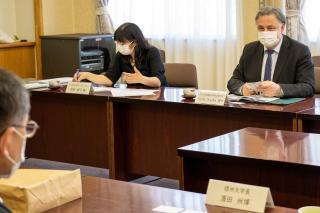 His Excellency Martin Tomčo, Ambassador Extraordinary and Plenipotentiary to Japan in the Czech Republic 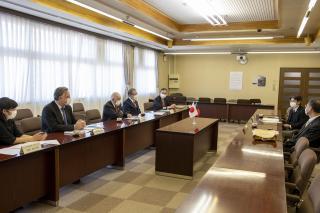