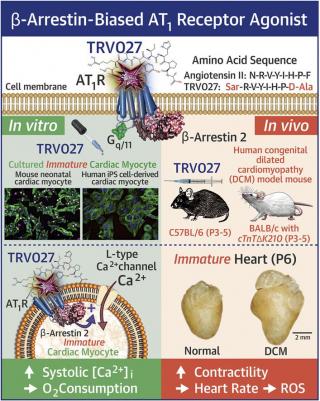 Researchers have identified a new druggable target for heart failure in neonates and infants, a condition for which there has been no specific treatment. Approximately 60 percent of children born with congenital heart abnormalities will develop overt heart failure within the first year of life. The progression of heart failure in these infants is often rapid, with a high frequency of fatalities. Stimulation of this target significantly increased the cardiac contractility of newborns and infants in mice with few side effects such as tachycardia, arrhythmias, and increased myocardial oxygen consumption, which are common problems with many cardiotonic drugs.

Unlike chronic heart failure in adults, evidence is lacking for the appropriate treatment of pediatric heart failure. The main reason for this is the great variety of pathogeneses and pathophysiologies of heart failure in children, making large-scale clinical trials difficult. Therefore, pediatric heart failure patients are currently being treated with adult medications without compelling evidence of their safety and effectiveness in children. This is a serious medical problem if taking recent progress in cardiac surgery, ventricular assist device, and heart and/or cell transplantation into account.

From this aspect, researchers at Shinshu University School of Medicine have continued research to "propose a new therapeutic concept from basic research that scrutinized the unique physiology of the pediatric circulation," and obtained the results of this study. The group led by Professor Mitsuhiko Yamada hopes to develop the world's first small molecule therapeutics for pediatric heat failure that can be easily used also by outpatients through collaborations with pharmaceutical companies.

Journal:Journal of American College of Cardiology: Basic to Translational Science