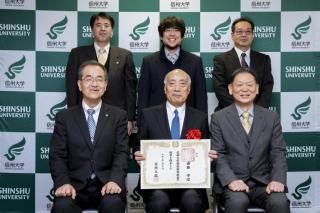 Professor Morinobu Endo, known for his work on carbon nanotubes was awarded the Special Emeritus Professorship -the first ever of its kind from Shinshu University- during a ceremony at the Nagano Engineering Campus on Friday, January 2020. The Special Emeritus Professorship is awarded to those who have received the Nobel Prize, Order of Culture, Medal with Purple Ribbon, the Imperial Award of the Japan Academy, or the Japan Academy Prize, who will continue to contribute to the University. Professor Endo has received the Medal with Purple Ribbon from the Japanese government in 2008.

In attendance at the ceremony was the Dean of Engineering and the Director of Interdisciplinary Cluster for Cutting Edge Research, with the award presented by President Hamada who thanked Professor Endo for his continual efforts in education, research and social contributions to the University. Special Emeritus Professor Endo graciously received the honor.