Associate Professor Yoshihiro Takeshita from the Faculty of Education 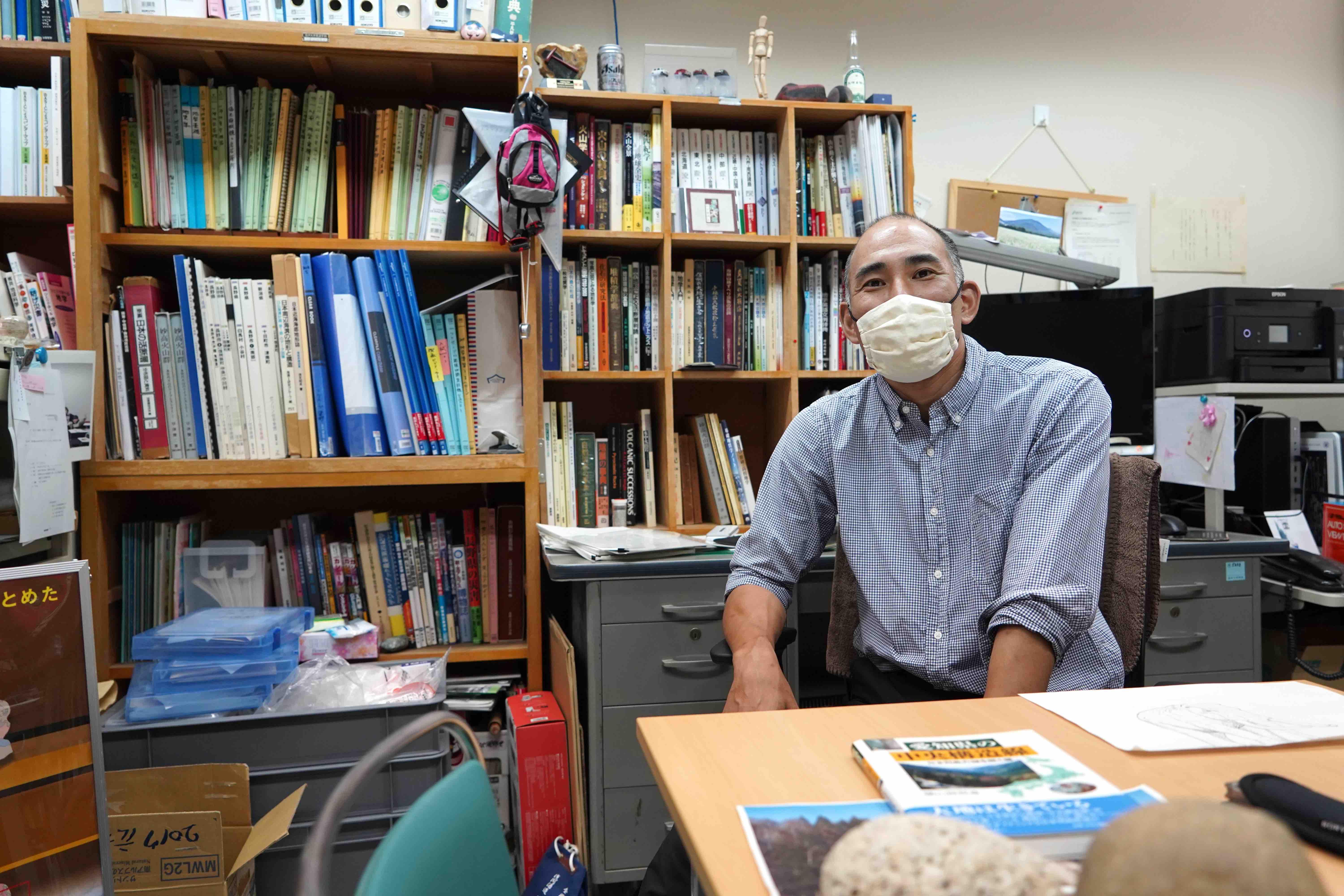 Please tell me about your specialty.

My specialty is Geology. It has been 4.6 billion years since the earth was created, this period is called the geologic time. But this is too long of a time span for a subject of study. I cannot cover all geologic time, so I focus on a particular era. The era I specialize in is recent, called the Quaternary. That is the period of time from 2.58 million years ago to the present. 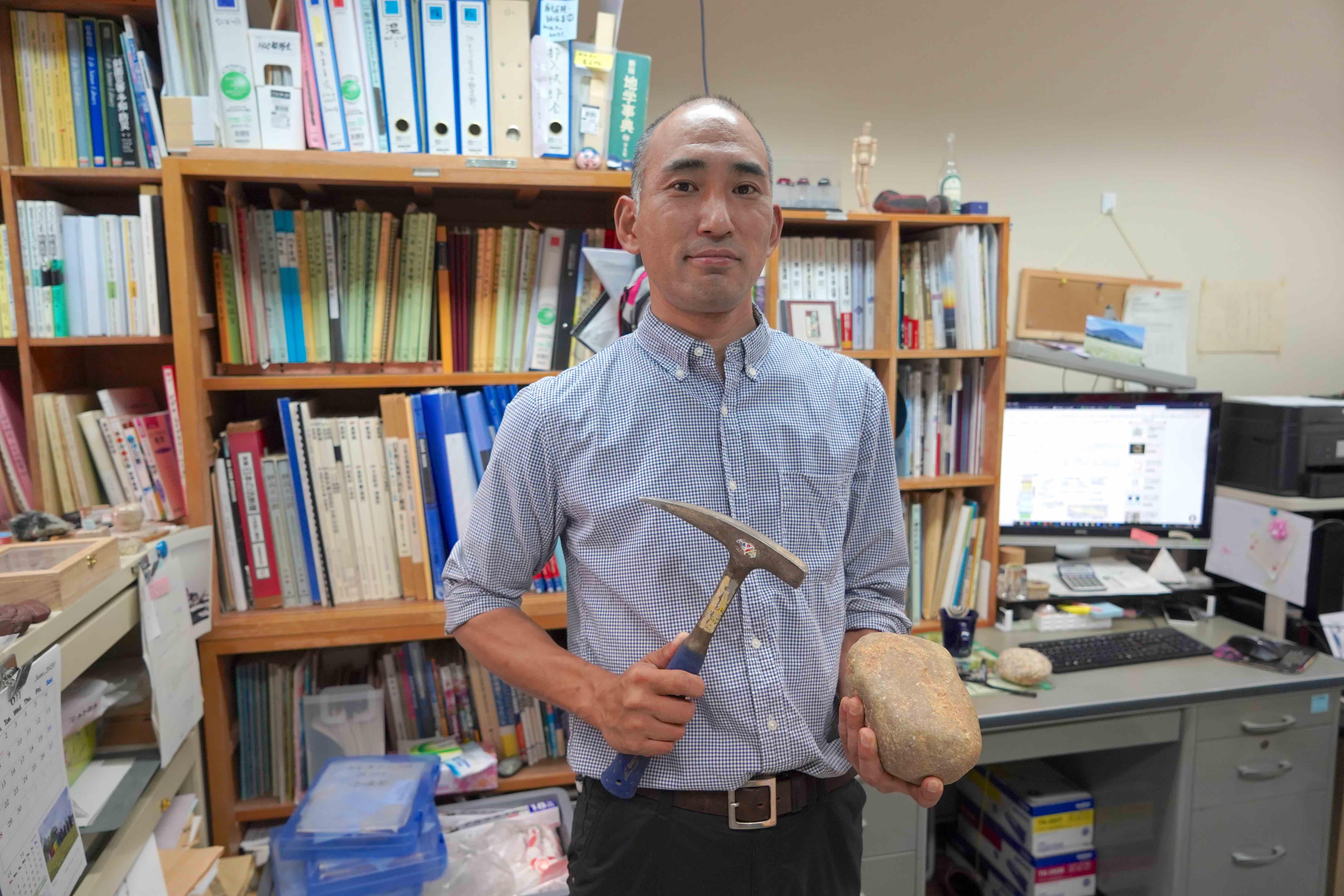 Why did you specialize in Geology?

I'm currently at the Faculty of Education at Shinshu University, but I am originally from the Department of Geology in the Faculty of Science. I entered the Faculty of Science of Shinshu University in 1995. When I was a high school student in Aichi prefecture I wanted to live away from my family and live alone, not too far, and I had a good impression of the beautiful landscape of Nagano prefecture. At such times, I came across the recruitment guidelines for the Department of Geology in the Faculty of Science. It said they had more than 30 days of field training each year with some geological surveys that involved overnight stays. I can't say this in a loud voice, but I had not studied earth science when I was in high school. Back then, there was a preconceived notion that geology was not a part of science but more of the humanities. I studied physics, chemistry and a little bit of biology in high school, so it seemed like I was crossing over to a different field, but because I loved being outdoors, I decided to get into geology, even though I wasn't so interested in rocks. So, when I was just a an undergraduate student, I enjoyed fishing and climbing mountains rather than practicing geological research.

When I entered the Department of Geology at Shinshu University, there were various research groups. Among them was a group called the Matsumoto Basin Collaborative Research Group, which investigated the formation of the Matsumoto Basin and volcanic history of Mount Ontake. There is a place called Lake Nojiri about 30 minutes from the Faculty of Education, and there is a group called the Nojiri-ko Excavation Research Group that research fossils and environment of the Last Glacial Age in Lake Nojiri, and I participated in such research groups. At first, I didn't really understand what kind of research I wanted to do, but it was fun doing something together in a group, and through participating I was drawn more and more into that world. I think that was the initial trigger.

Is there a noteworthy characteristic to the geology of Nagano Prefecture?

There is a geological map at the entrance to my office, although I was not involved in making this map, this is a great map of the geology about Nagano Prefecture. Each color signifies differences in strata, rocks, etc. As you can see, the land of Nagano Prefecture is very complicated, and this figure clearly shows that it is made up of various strata and rocks. I don't think there is a place in Japan or the world that has more geological variety than Nagano Prefecture. 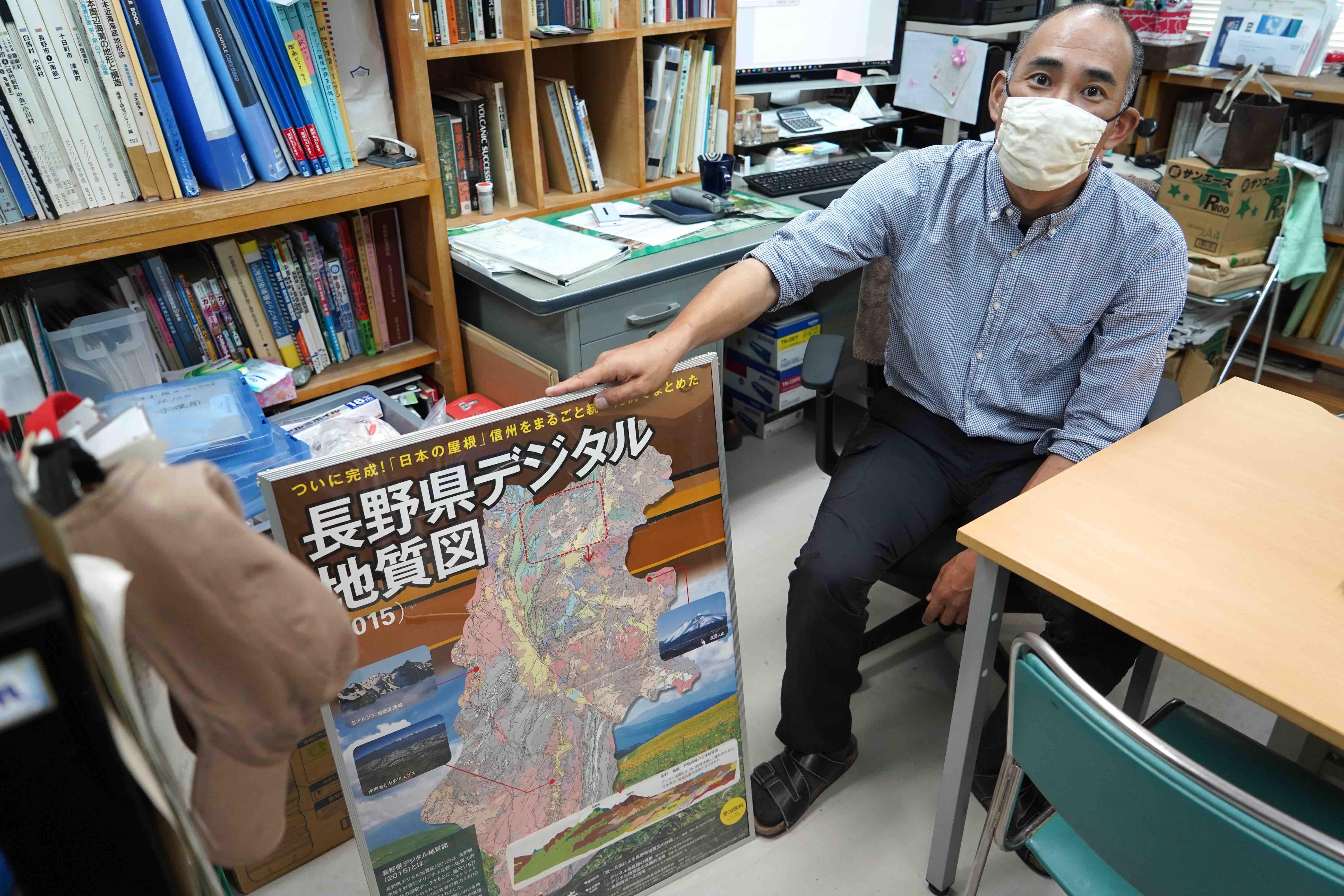 There are many different colors here in Nagano. There are many grays and reds here, but there are many greens, blues, and browns here. Each color represents a different type of strata. A line showing such a large difference in geology is called a tectonic line. The Median Tectonic Line is famous in Japan and can be seen in Nagano Prefecture. From Matsumoto, you can see the Northern Alps (Hida Mountains), where the rock is old and hard. Both Central and Southern Alps (Kiso and Akaishi Mountains), like Northern Alps, are made of hard, old rock. That is why these mountains are steep and jagged. On the other hand, the mountainous area on the east side of the Itoigawa-Shizuoka Tectonic Line is made of new and soft strata and volcanic ejecta. Therefore, many of these mountains have a loose shape. The Northern side of Nagano Prefecture has more volcanos. 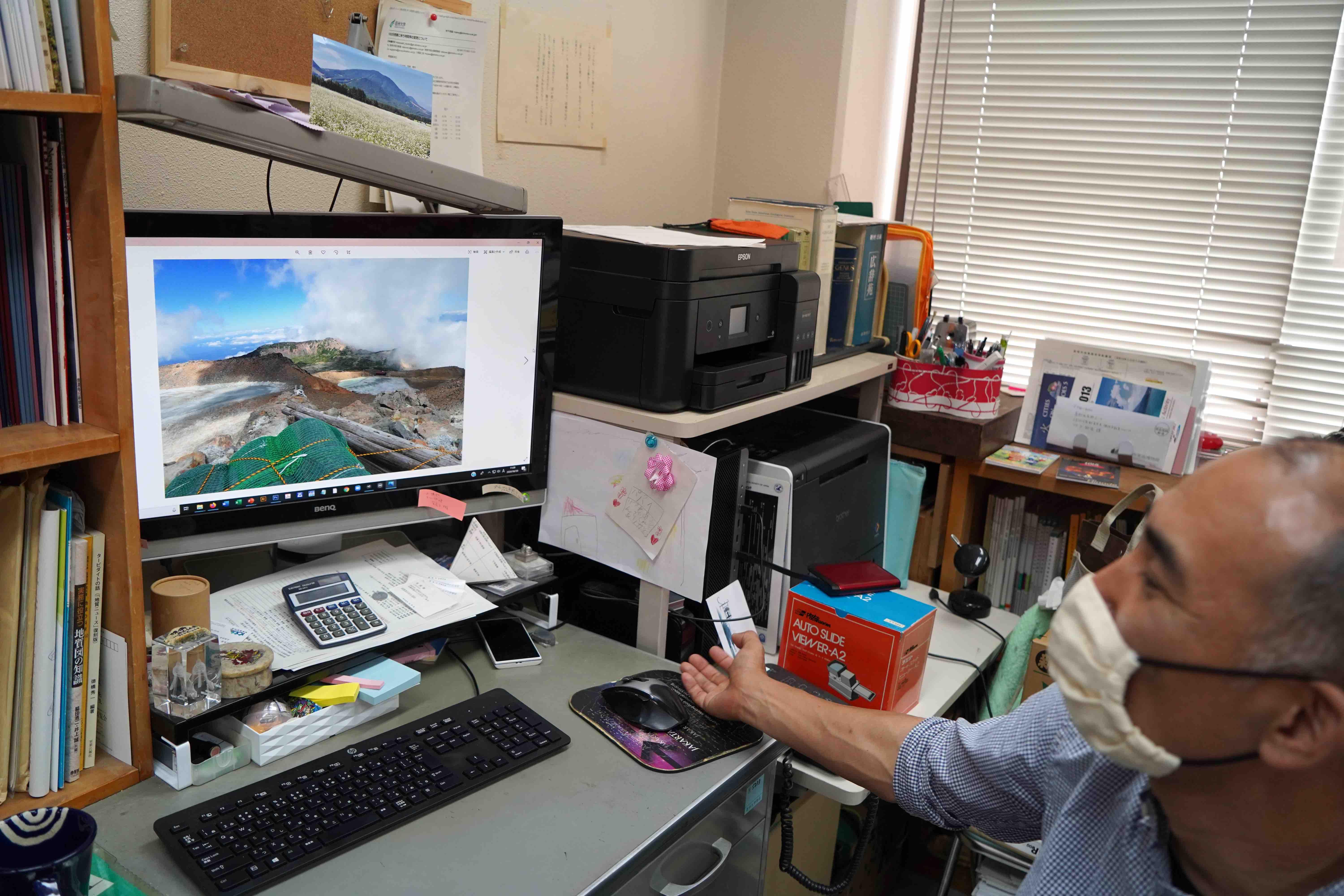 The Ontake volcano erupted in 2014. That is where I did my fieldwork (geological survey) as an undergraduate student, my master's thesis and also my doctoral research. I lived in Matsumoto for 9 years from the time I entered university until I received my PhD. On this map you can see Mt. Norikura, which is famous for Raicho(thunderbirds) and Alpine plants. We are worried about Mt. Yakedake because a recent earthquake swarm has occurred this year. The colors here on the geological map have a lot of variety. I think Nagano Prefecture is an interesting area for studying geology because it has undergone tremendous change.

I should note, my specialty is not only the Quaternary but also Volcanology and Tephrostatigraphy. I study volcanic ash (tephra) to connect the geological formations in distant places like a puzzle. Suppose a volcano erupted yesterday and volcanic ash fell. Let's say it was saved in the stratum. If this is studied by a researcher 10,000 years later, the volcanic ash serves as a stored time reference. Volcanic ash creates a stratum in a large area almost instantly. By finding and connecting volcanic ash from strata in various parts of Japan and the world, I've been able to clarify the time in each part, revealing the history of the land in the region.

The time scale of geology is so grand compared to our lives. What do you enjoy about research?

Research is the most fun when I am in the midst of coming up with ideas and in the pursuit of hypothesis and collecting evidence. After that, it's a lot of work to sort out research results and to summarize it. When I'm writing, reporting, or presenting, the results are already discovered, so it is not as exciting, but it is important to share research results, especially as someone at a public university. 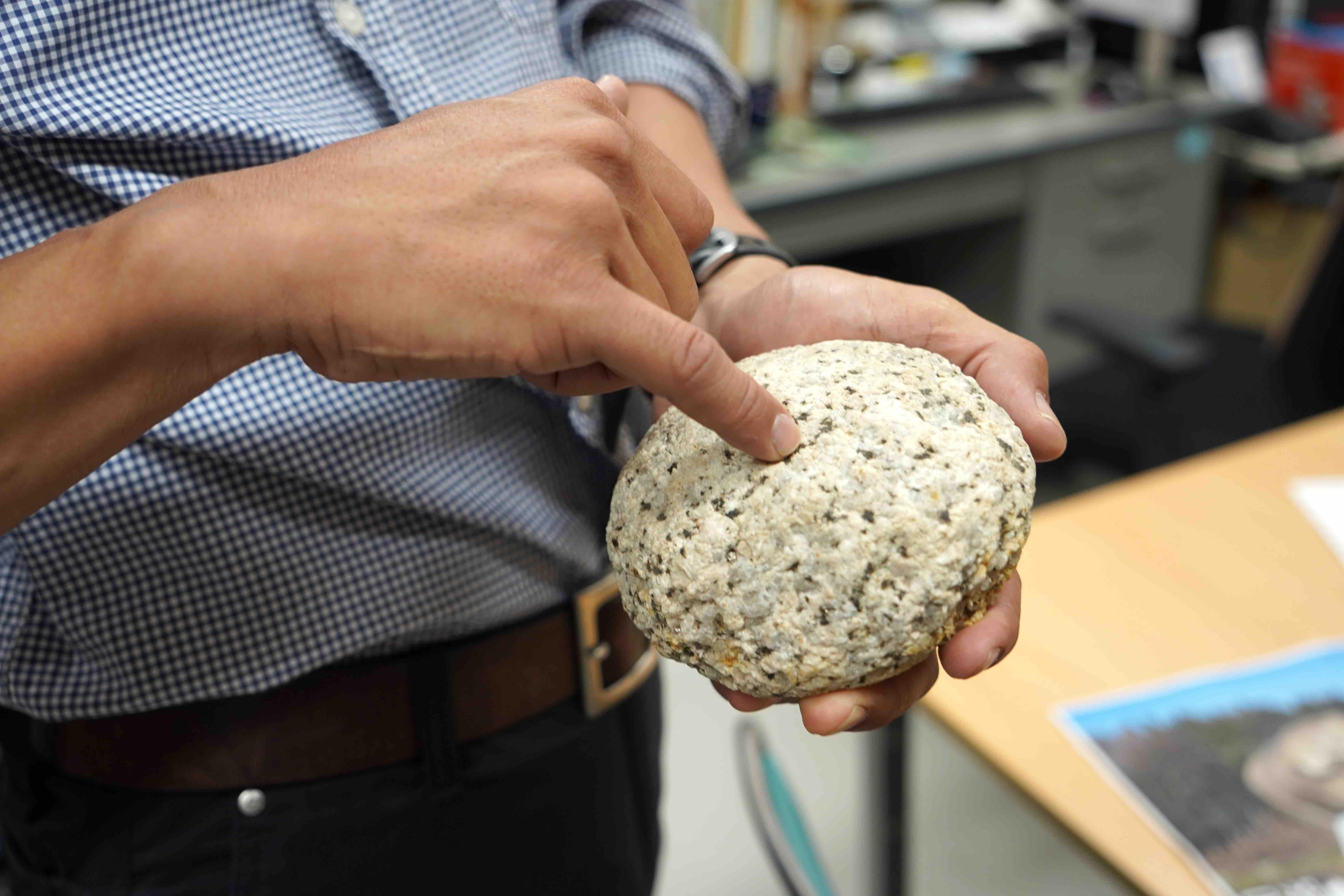 It's fun to think about how a particular stone formed, what kind of events caused it to form. Each rock has a story. I think that is the interesting part of geology. When I was high school student there was a very interesting teacher of geology who lived nearby. He was actually a Buddhist monk and an amateur geologist, but he was very knowledgeable about the geology of the area and wrote a book about the median tectonic line of Aichi prefecture. I only realized the connection a lot later. His name was Yokoyama Yoshiaki. I visited his temple during a school field trip, but at the time, I wasn't aware of the fun of geology, so it wasn't a great opportunity. He has since passed away, so I wish I had listened to his talk more intently. 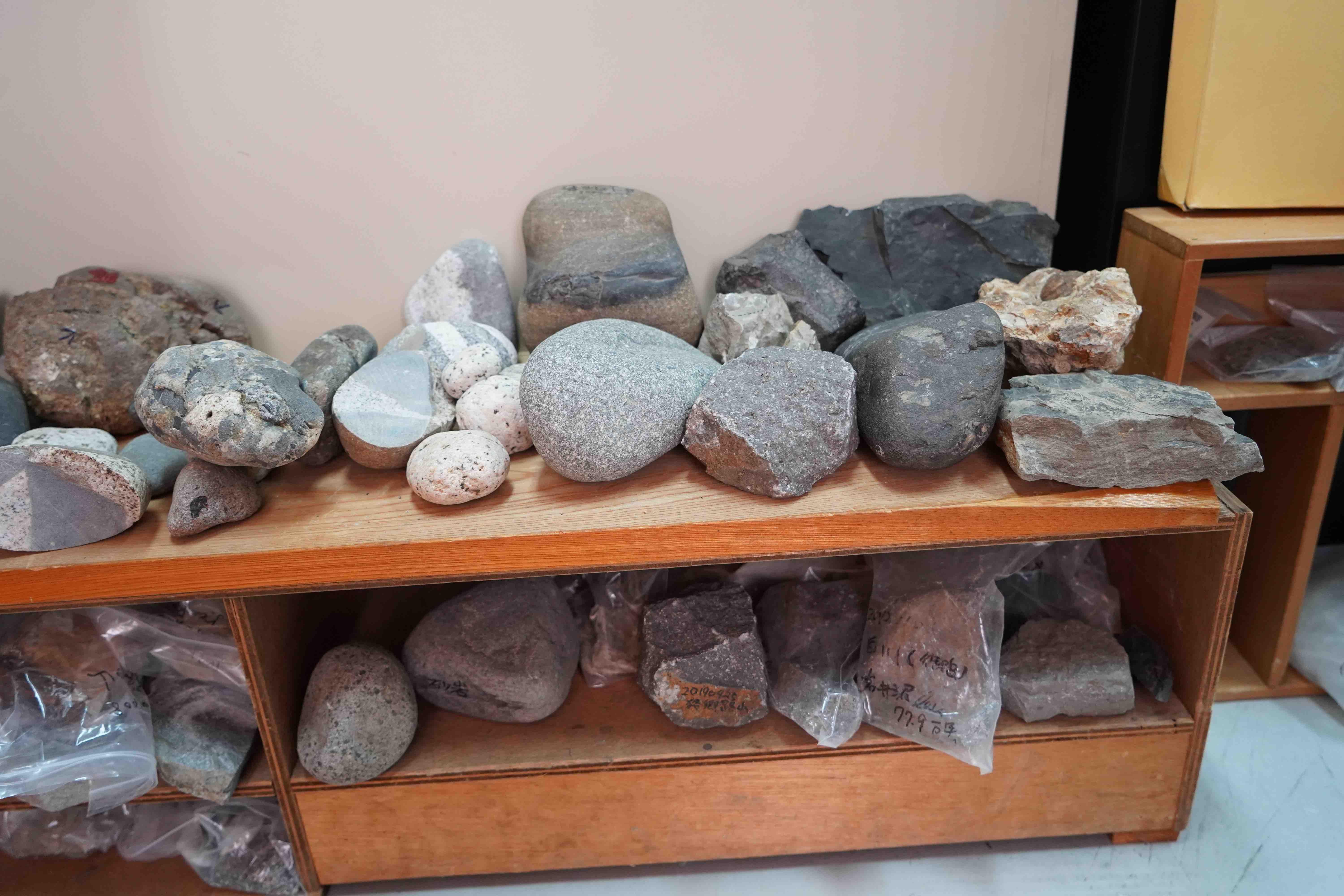 How can you overcome difficulties in research?

If there are many difficult things that I can't overcome, it's important that I don't take them on all by myself. For example, as I mentioned earlier, the Nojiri-ko Excavation was conducted as a part of a group, as was the Matsumoto Basin Collaborative Research Group. When research is conducted as a part of a team, we set goals together, and problems can also be shared. When I hit a wall, I discuss it with the group, and we think of a new strategy together. 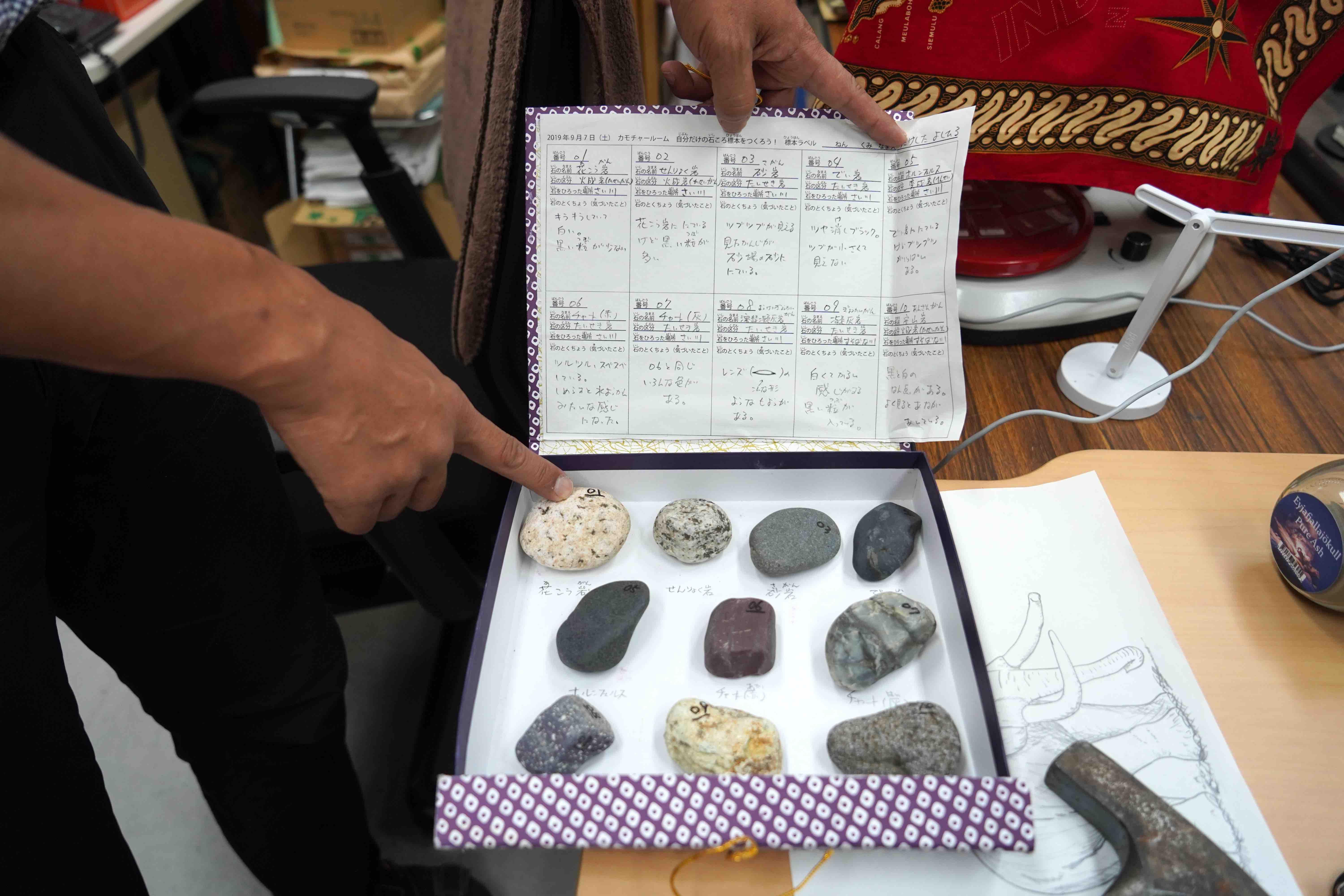 1) An educational tool made for teachers.

I hosted a workshop where we collected rock specimens at a nearby elementary school. The specimen box uses an old dessert box. The stones used for rock specimens were taken from a river near the elementary school with the hope it will help teachers when they get asked by students what a certain rock is. Now I'm proud to be teaching earth sciences at the Faculty of Education, but because I'm from the Faculty of Science, at first, I didn't know what to do in the Faculty of Education. I really struggled in the first years. I believe that earth science is an important study for children who, of course will live on Earth, and is very fascinating. I would like to continue spreading learning that allows children to think that earth science is fun. 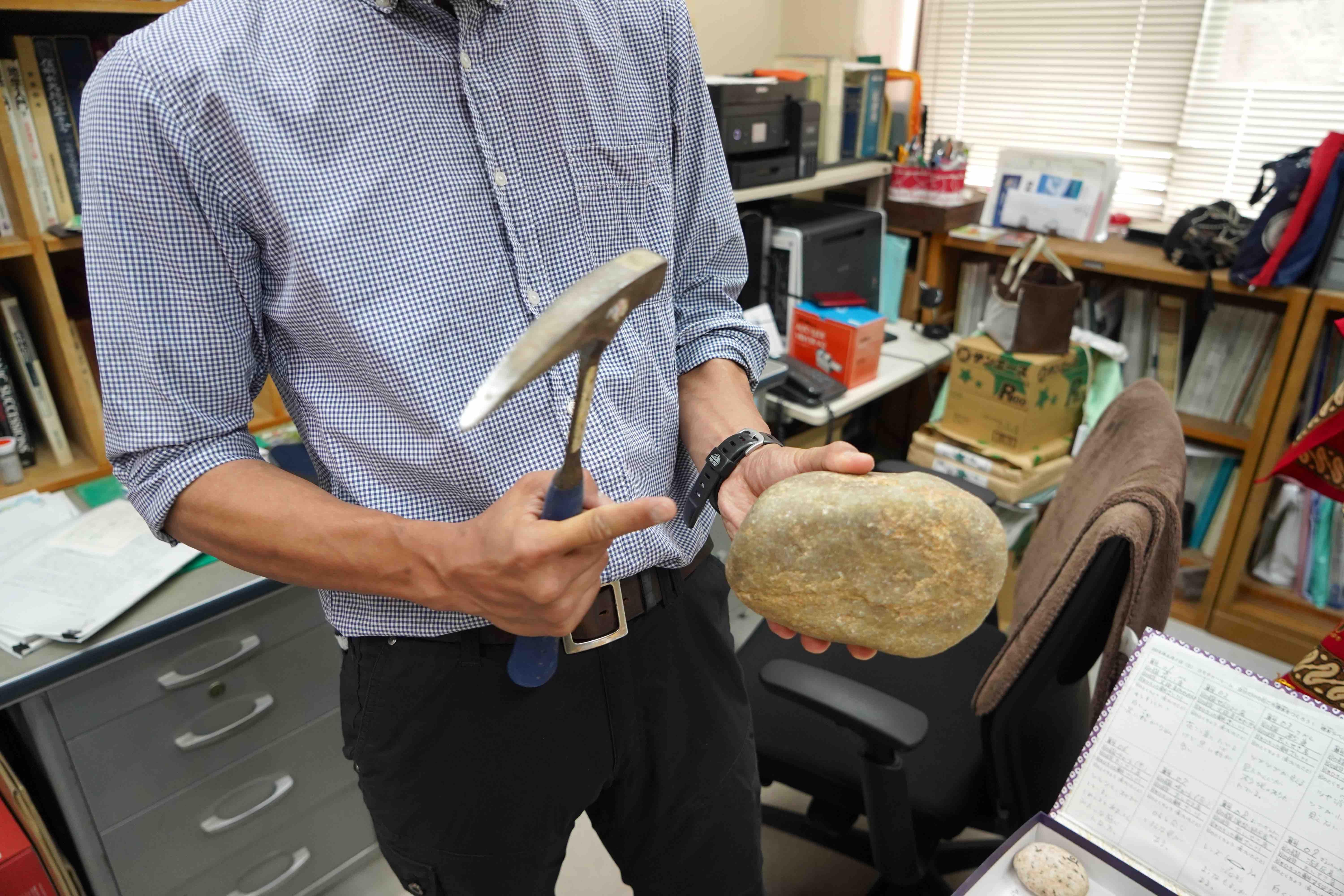 When we find a rock, we might have to remove the weathered surface to see what is fresh inside. This is an essential tool for geologists. When I go out to geological surveys, I carry a hammer on my belt so that it can be used anytime. 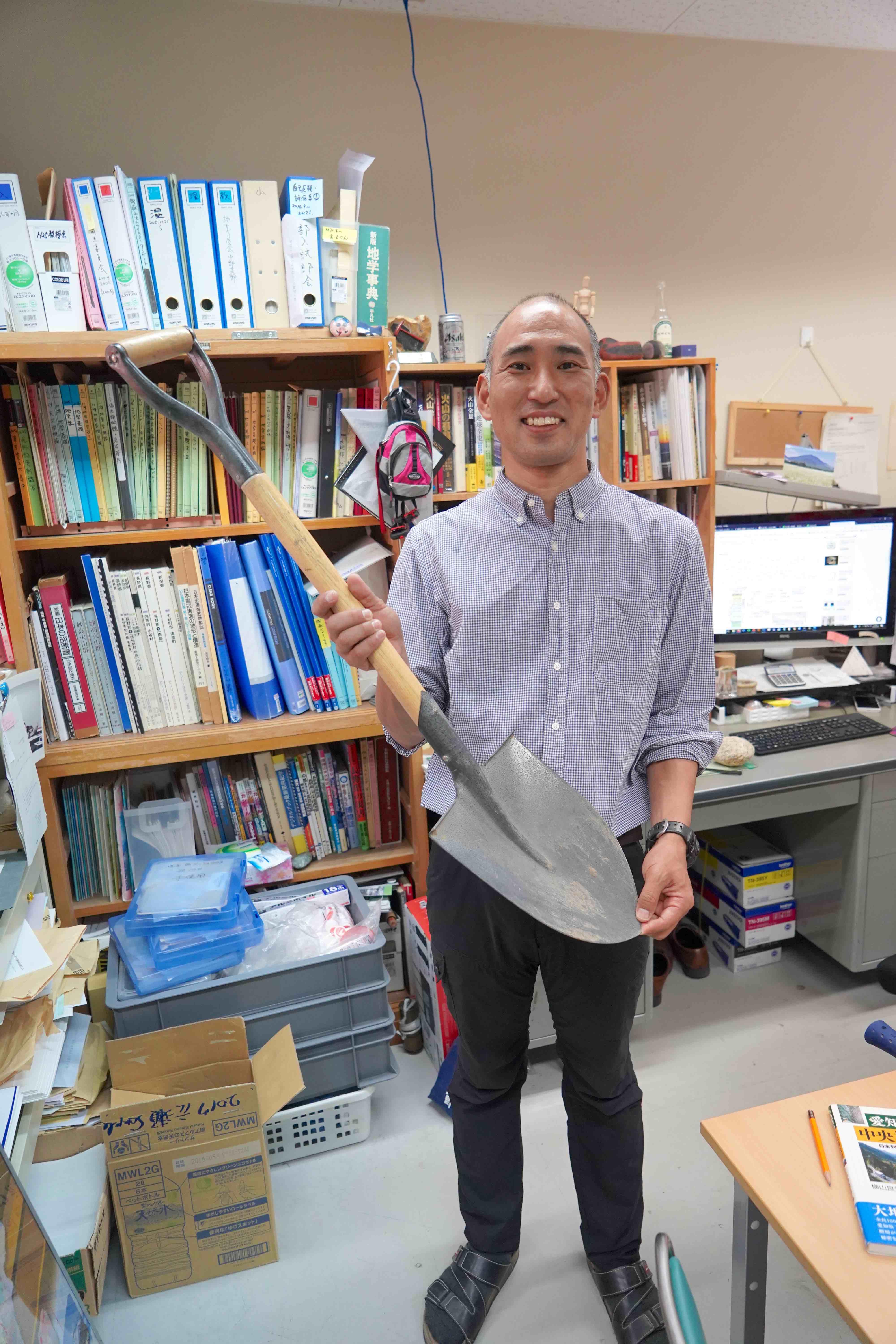 Since I research the Quaternary geology, the target strata of interest are often unexposed. If there is a spot I am curious about, I have to dig for it, (only upon receiving written permission from the Ministry of the Environment, Forestry Agency and Forest Management Bureau). Today, my favorite shovel is in the car. It's a portable shovel that has screws to fold in half. This is a different shovel I have that is full-sized. We dig the ground to survey the layers of strata.

Books that are noteworthy 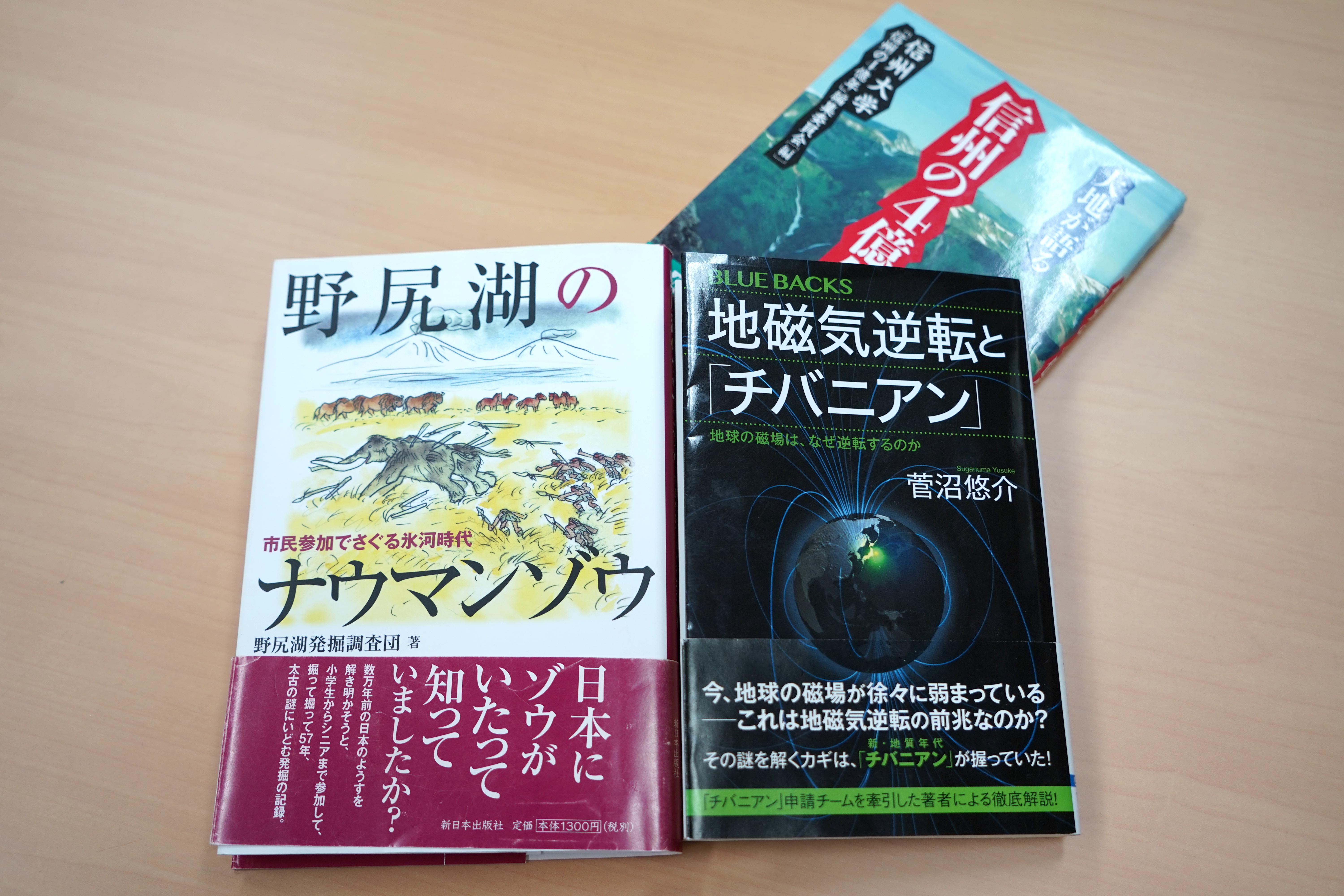 At Lake Nojiri in the northern part of Nagano Prefecture, fossils of Naumann's elephants, stone and bone tools have been found from the strata of about 60,000 to 38,000 years ago by excavation surveys over the last 50 years. This may be the oldest human activity found in Japan. Nojiri-ko Excavation will continue in search of clearer evidence of human activity.

Can you guess what this skull is? 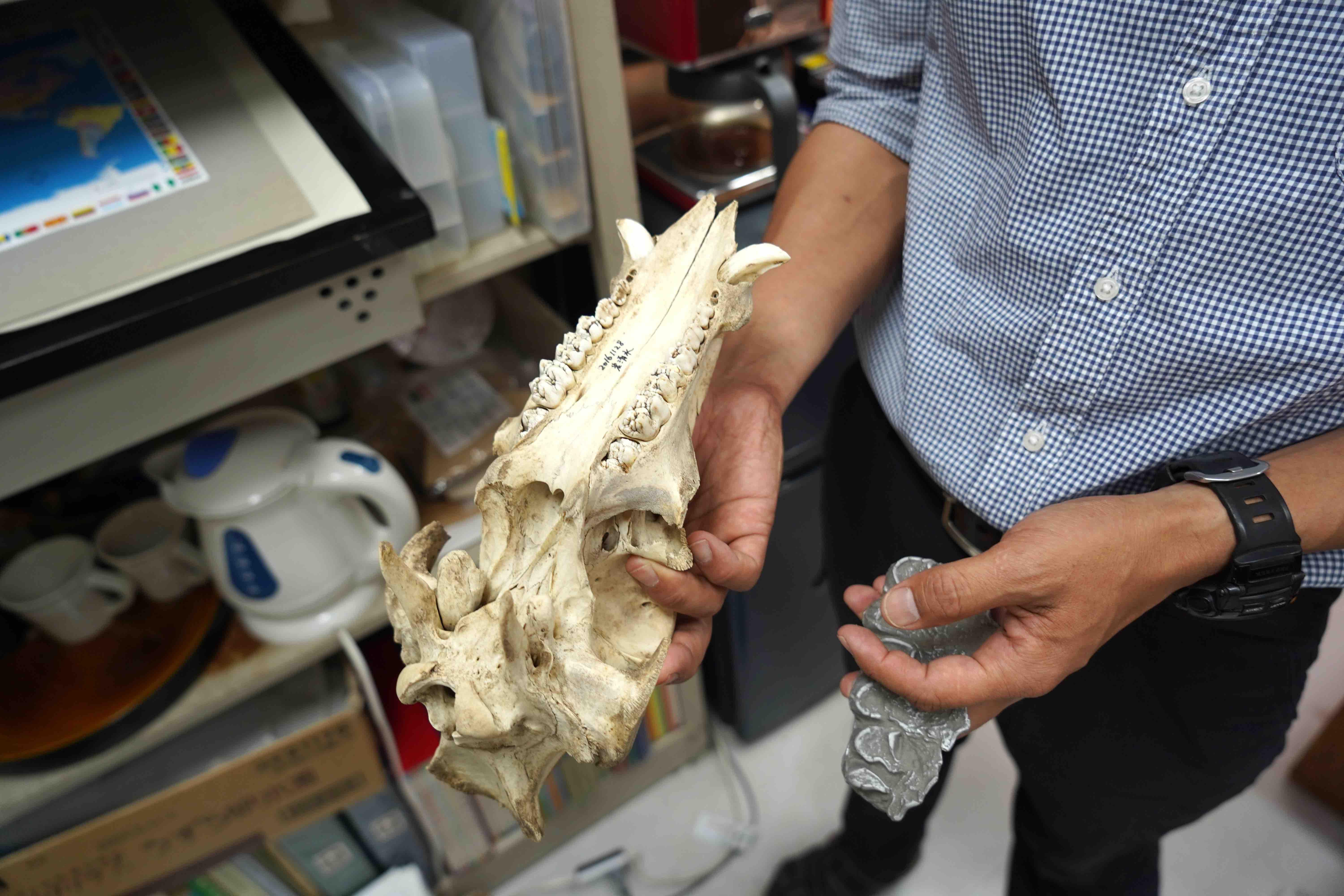 It is that of a boar. We can tell from the shape of the teeth that it is omnivorous, like us humans, meaning we eat different things. It is also that of a younger animal, because the teeth are clean, and the wisdom teeth have not grown in yet. I am guessing a hunter killed it, because there are knife marks on it. They probably took the meat and fur but left the bone. If it had just died in the wild or an animal ate it, there would be no knife marks on the skull.

Educational tools can be found out in the field, or even in your kitchen. 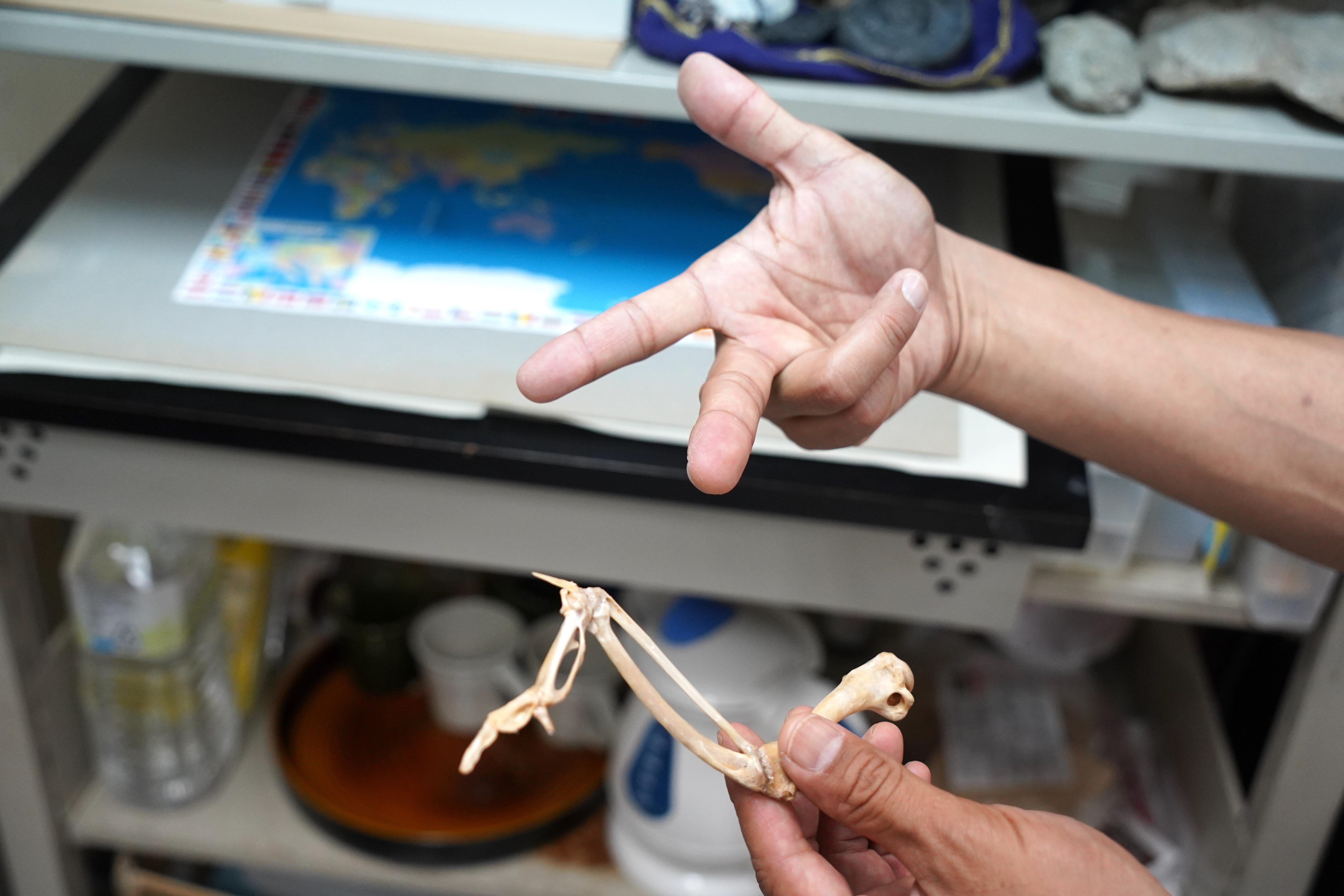 This is a chicken wing which is familiar to us all. After I ate the chicken, I boiled the bones and reassembled it with superglue. Birds are thought to be the descendants of certain dinosaurs, and a bird's skeleton is different from humans. However, there are some similarities between chicken wings and our human arms. Both birds and humans have two bones on their forearms. This is what the skeletons of birds and humans have in common. Having two bones in our forearms so we can flip the palm.

A little piece of Earth project 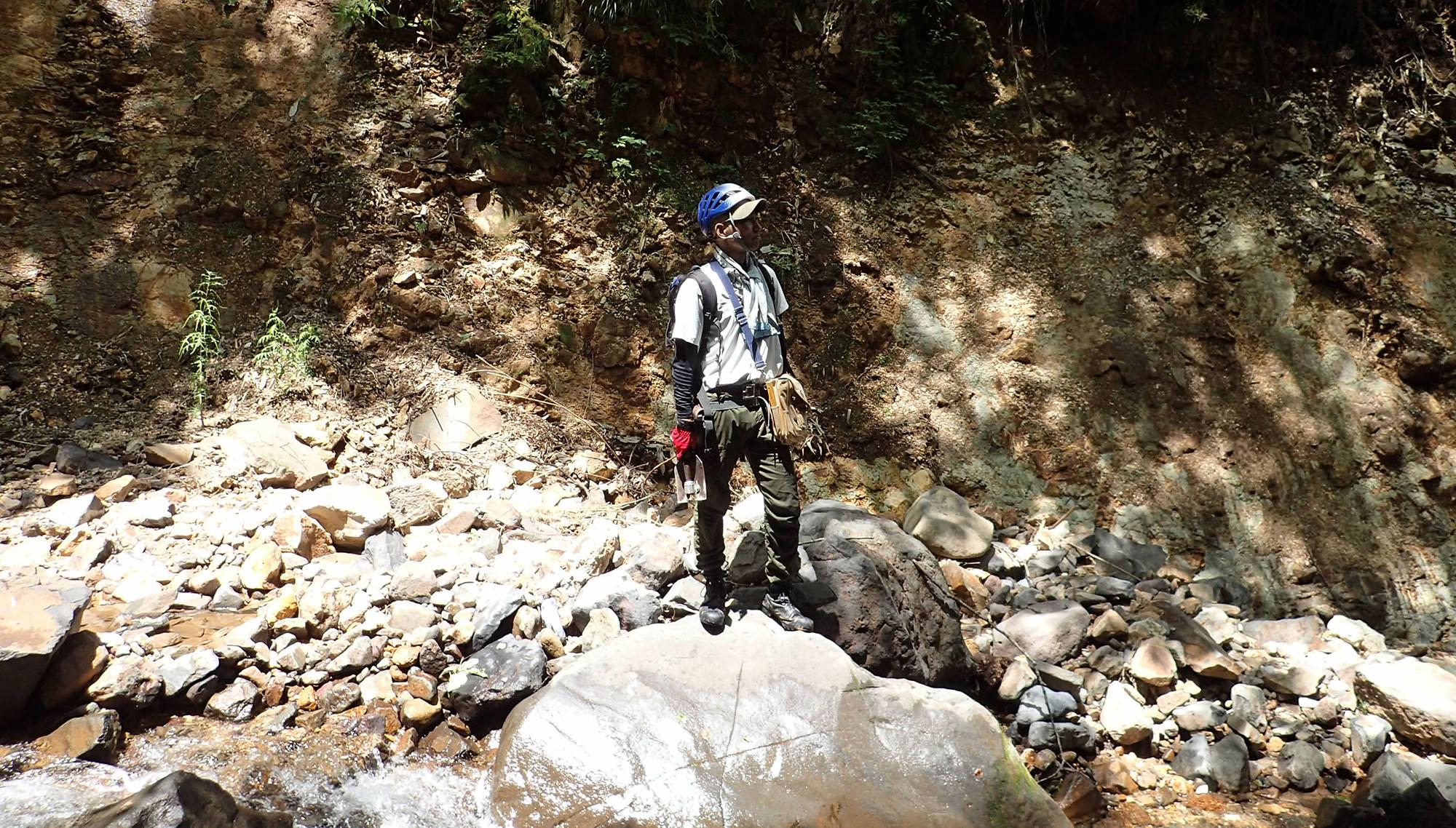