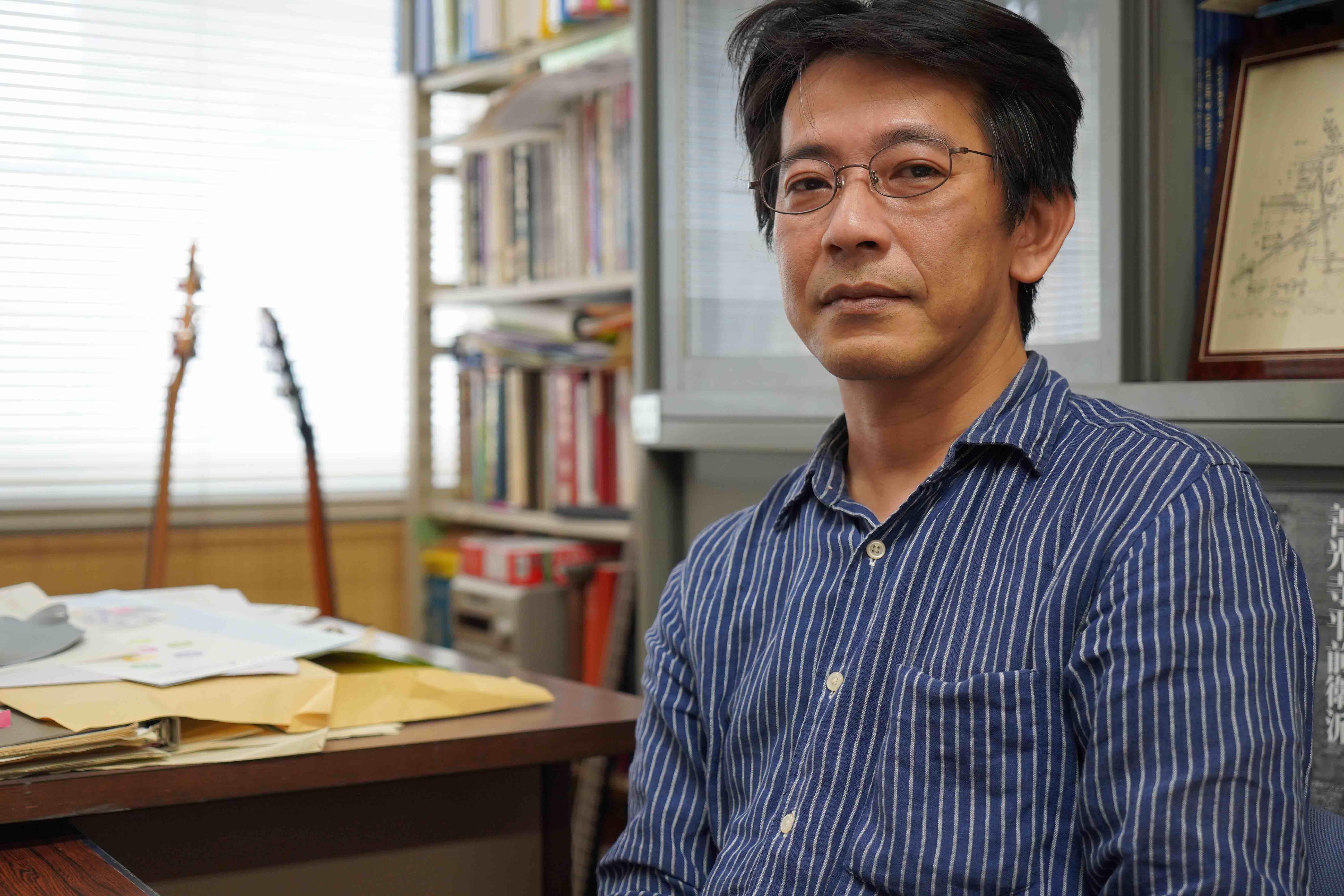 What do you specialize in?

I specialize in composition and musicology in the genre of contemporary music. I teach music aesthetics, music theory, the history of western music, composition and arrangement. In the graduate school I teach music psychology, which examines what people think of when they hear music. This is a popular topic among students. What are components or aspects that are universal when people hear musical sounds? Music psychology examines this quantitatively. When you hear a sad song in the key of minor, why does it sound sad? Many students are very curious about this topic.

How did you become a researcher?

When I entered university, I wanted to critique music. However, at the advice of my supervisor I studied composition in graduate school. This was because I had won awards at competitions for music composition. In the beginning I didn't intend to become a composer, but by the time I was in graduate school I became known as a composer. I wasn't particularly interested in performing. Therefore, I continued as a composer.

I enjoyed music immensely, so I looked for jobs in music. During the end of the Showa period and the beginning of the Heisei period, music critiquing was the most coveted position in the music industry. However, now those positions don't really exist. Anyone can critique music on social media. Critiquing was a lot tougher job than I had imagined, so I became a researcher instead.

How do you compose music?

Music initially begins in my head, and I write that down on paper. Then, I would have a third party perform the music. This is the way music is done classically. Fortunately, the performers I work with are very skilled. So, I feel like the process became backwards, everyone performs and then the composition is made. Now that I look back on the process, it seems that way.

When there is no variation between what I envision in my head and what is played in the real world, when I can write the music precisely, when there is barely a margin of error, though I do not want to focus on just the technical aspects, I find that very enjoyable.

Did you learn any instruments as a child?

I practiced playing the piano when I was very young. I learned to play the electric bass and guitar a lot later. However, I prefer listening.

Where do the ideas for composition come from?

I believe we collect music as knowledge in our heads, and a re-arranging of that prior knowledge becomes the output. Gisèle Brelet said that music composition is derived from our yearning for more, our dissatisfaction with existing music. So, I believe originality does not exist. It is just a re-arrangement of memories. 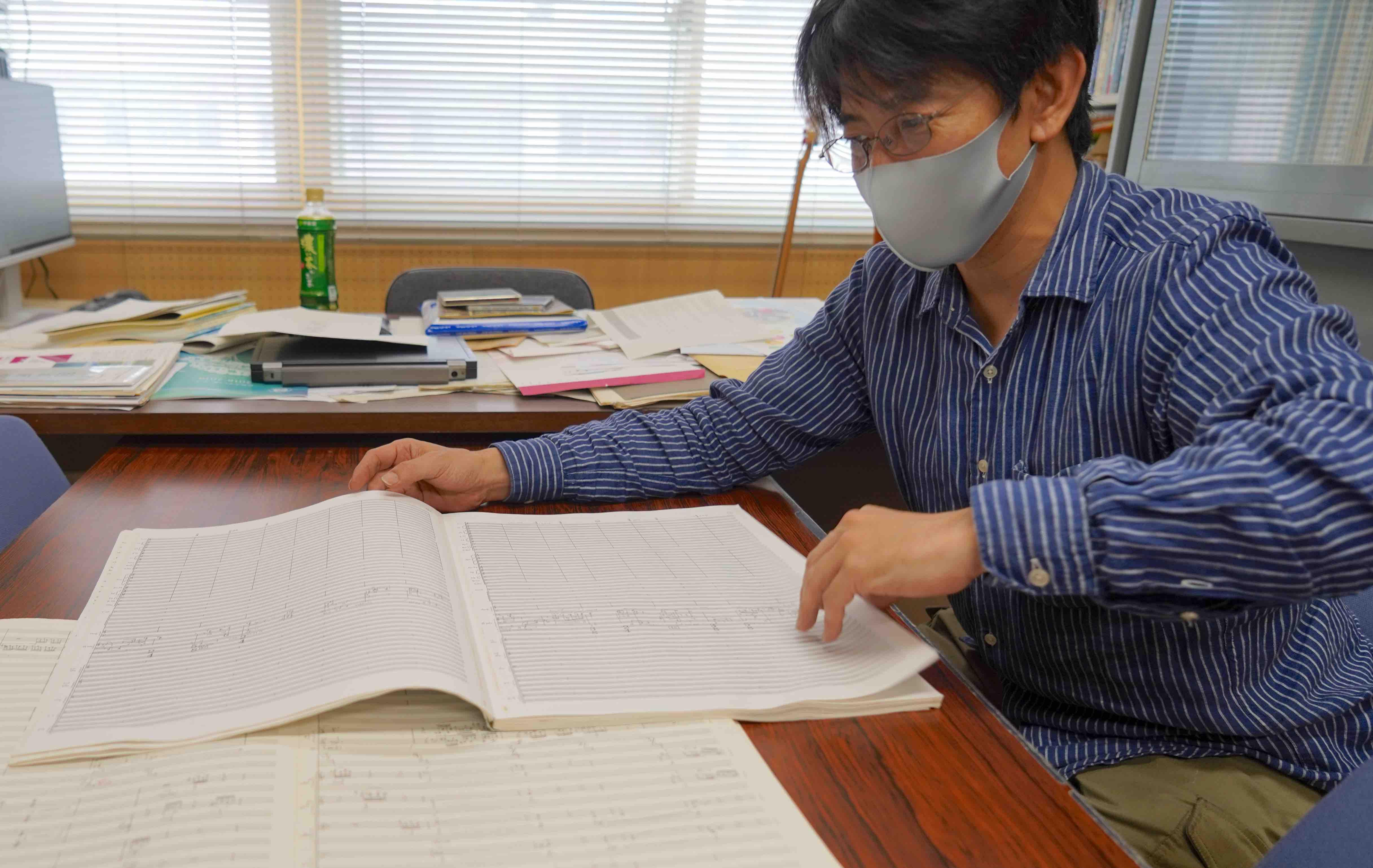 Music is the same as dreaming. Two people in the same concert hall, they might be sitting next to each other, but they hear something different. What is derived from that? Listening is similar to dreaming. It's very personal. A popular song conquers the realm of the personal to become something larger.

So, the more I study, the more I struggle to understand. Maybe when I understand, it will cease to be of interest to me. I am constantly trying to understand what music is. Will music continue to exist? Aren't too many researchers and artists trusting music too much? I would like people to doubt music more.

For example, music of the past, of the Showa period was a lot more complex theoretically. Current music is more simple, but in terms of sound pressure and technique, current music is far more advanced.

So, in terms of music theory, music might have degenerated. It can also be found in design. Some people think cars were designed better in the past. I have a friend who drives a car that is 40 years old. It's expensive to keep an old car like that.

CDs still exist currently, but people no longer listen materially. People download music to their smartphones or listen to streaming services that play music non-stop. Can that be referred to as listening to music? Isn't it just trying to avoid the silence?

When the sound is there to fit into the space or the ambiance, the music just plays from left to right but not appreciated as a composition. People are not aware of what composition of which artist they are listening to. Apparently, according to some polls, the number of people who say they are not interested in music has increased over the last ten years.

That is scary from the point of view of someone like myself who makes their living in music. I make avant-garde music, so it does not relate much to regular, everyday life. Unfortunately, the music I make is appreciated by a small audience of core fans.

So, the business aspect of music has changed?

Yes, CDs no longer sell. It's the same as the publishing industry. Books don't sell. People can read things digitally. Maybe it's more convenient to stream something on YouTube. So, the business aspect is definitely changing. On the other hand, the number of live shows is increasing.

So, while things shift online to the internet, people are still craving the live performance. Perhaps audiences want to share a live experience with other people. But COVID19 has changed that. Musician are suffering, saying they have lost their job. Some people are playing live together online, on Zoom. However, there is sometimes a time-lag and the online music market feels like it just exists in a sub-real world. 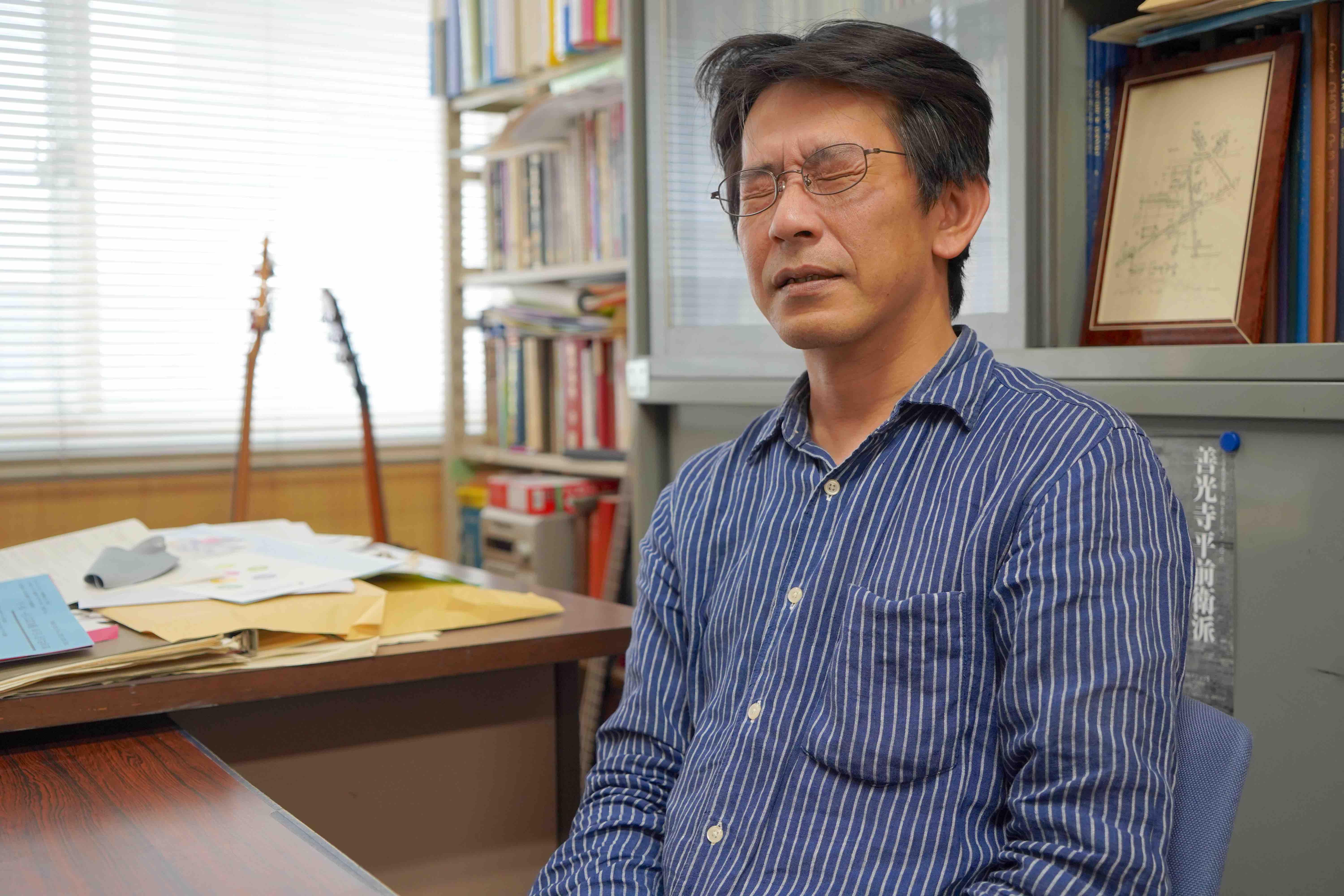 How can sounds express emotions like happiness and sadness, etc?

The answer to that, we don't know. If you have subjects listen to the melody of the children's song, "Butterfly" (known as "Lightly Row" in English), take a survey of this song in C major, most people will say it sounds cheerful. The way we interpret sounds might be significantly influenced by Western music that relies greatly on melody and harmony.

Music in Japan did not have harmony. Luis Frois in the Azuchi Momoyama Era (1573-1603) compared the culture of Japan to Europe. He observed that Japanese music is very noisy and loud. So, for him, who lived during the Renaissance in Europe music was harmony, and Noh and Minyo of Japan have short melodies that sounded like noise. A person's cultural background greatly effects how they interpret such sounds.

In the 12th century in Europe, some of the musical notes did not yet exist. So, the music sounds a little hard. The notes in-between was added later. The triad chords came to be in the 14th century.

Associate Professor Ono starts to play the piano to demonstrate.

Dogs and cats are also interesting. They also have likes and dislikes. When I play music to my cat, he will sit and listen to songs he likes. I used to have a Rough Collie that would howl whenever she was left alone. She was also sensitive to the sound of the police car siren. She was a very smart dog, but she wasn't very interested in music. There was no difference in her reaction when listening to Mozart or Webern. According to some studies in the US, pets, maybe even amoebas react to frequencies too.

Do all humans have or make music?

Apparently, there are some cultures without music. In those societies there is no concept of invention. A while ago a popular research topic was creativity. They were looking at minority groups here and there. There was a group of people with no idea of inventing tools. I read that paper, but I wonder if it is true. I don't know if such groups have music.

Researchers don't know when or how music began either. Was it a communication signal? Was it for festivals? For social reasons? Like animals is it to demonstrate territory or to call out to potential mates?

A musicologist called Curt Sachs describes all these possibilities in his book, "The rise of music in the ancient world, east and west" but at the end, he says, there is no way to say how it started. It's the same as drawing. It is hard to say. So maybe, it is just a signal. When animals make sounds, they are not making music. If you read Latin or the Koran, or even Buddhist scripture it is often read in a rhythm. So, were the words first? Or the rhythm and intonations?

My favorite items for work are:

1) Pen and paper for compositions 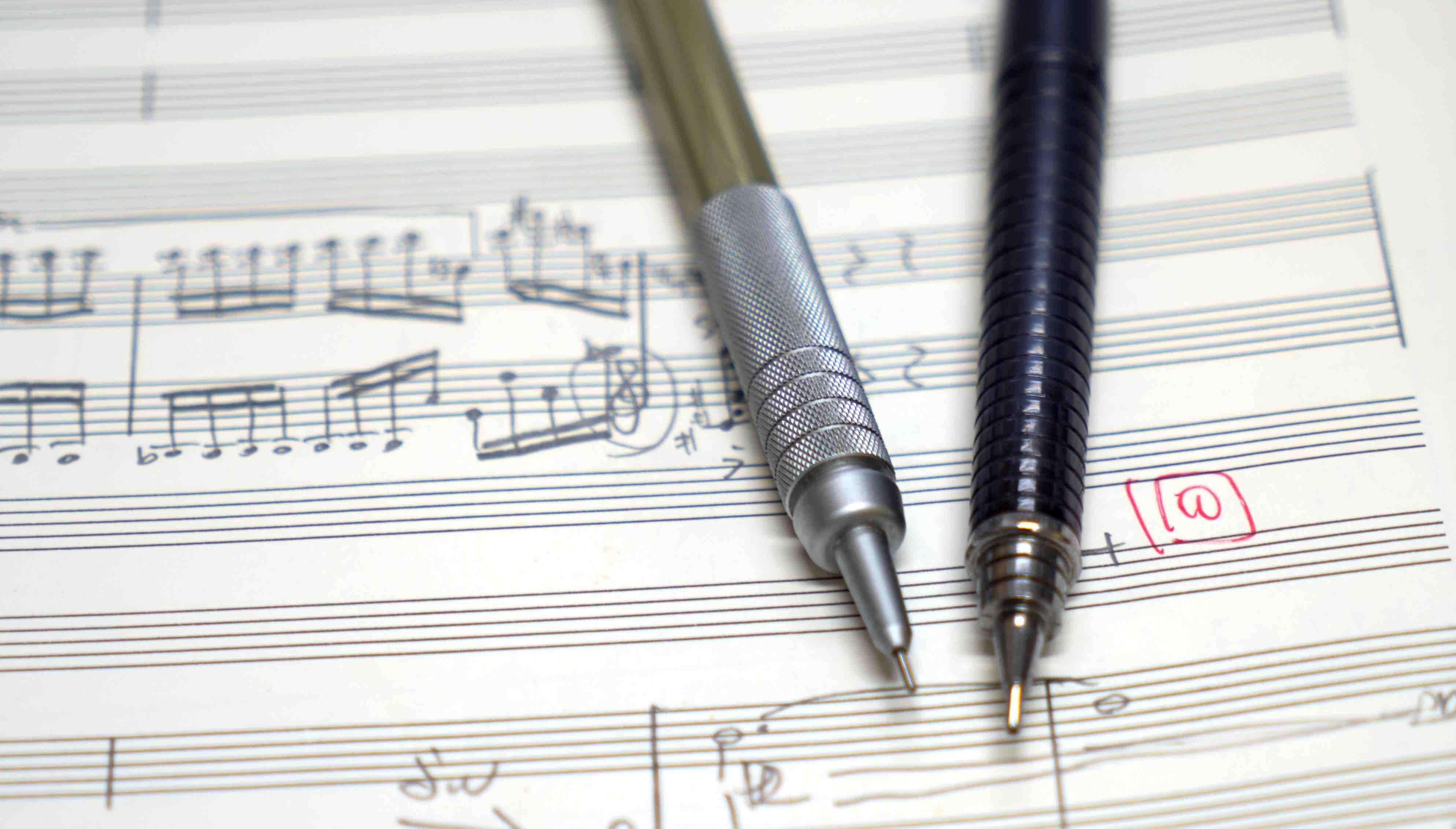 and Takayanagi Masayuki. He might have been the most influential artist for me. He completely changed my understanding of composition. 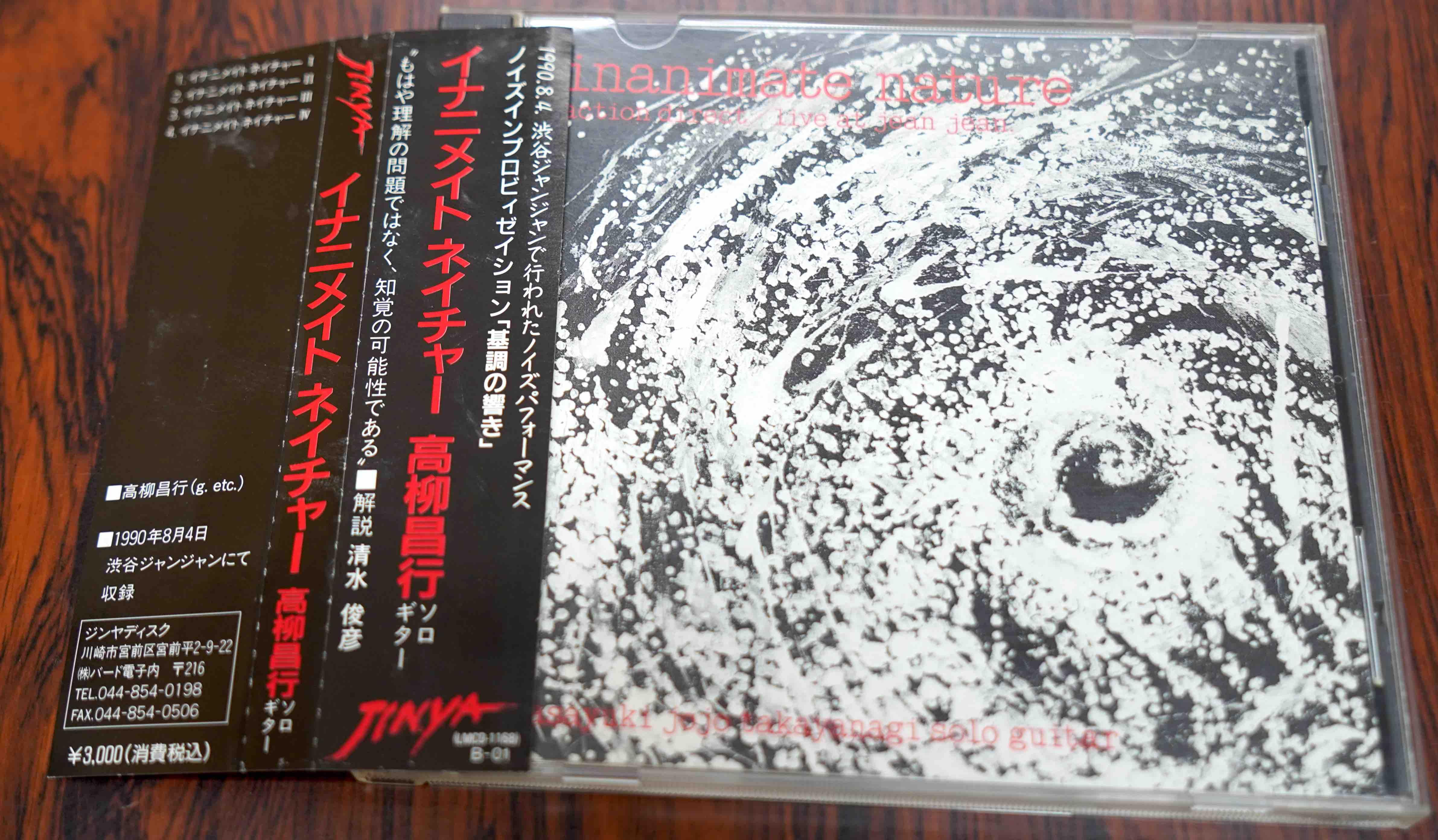 3) There are some instruments in my office like the piano and electric guitar. This guitar is not an expensive guitar, but I have played it during live shows many times, so I take good care of it. 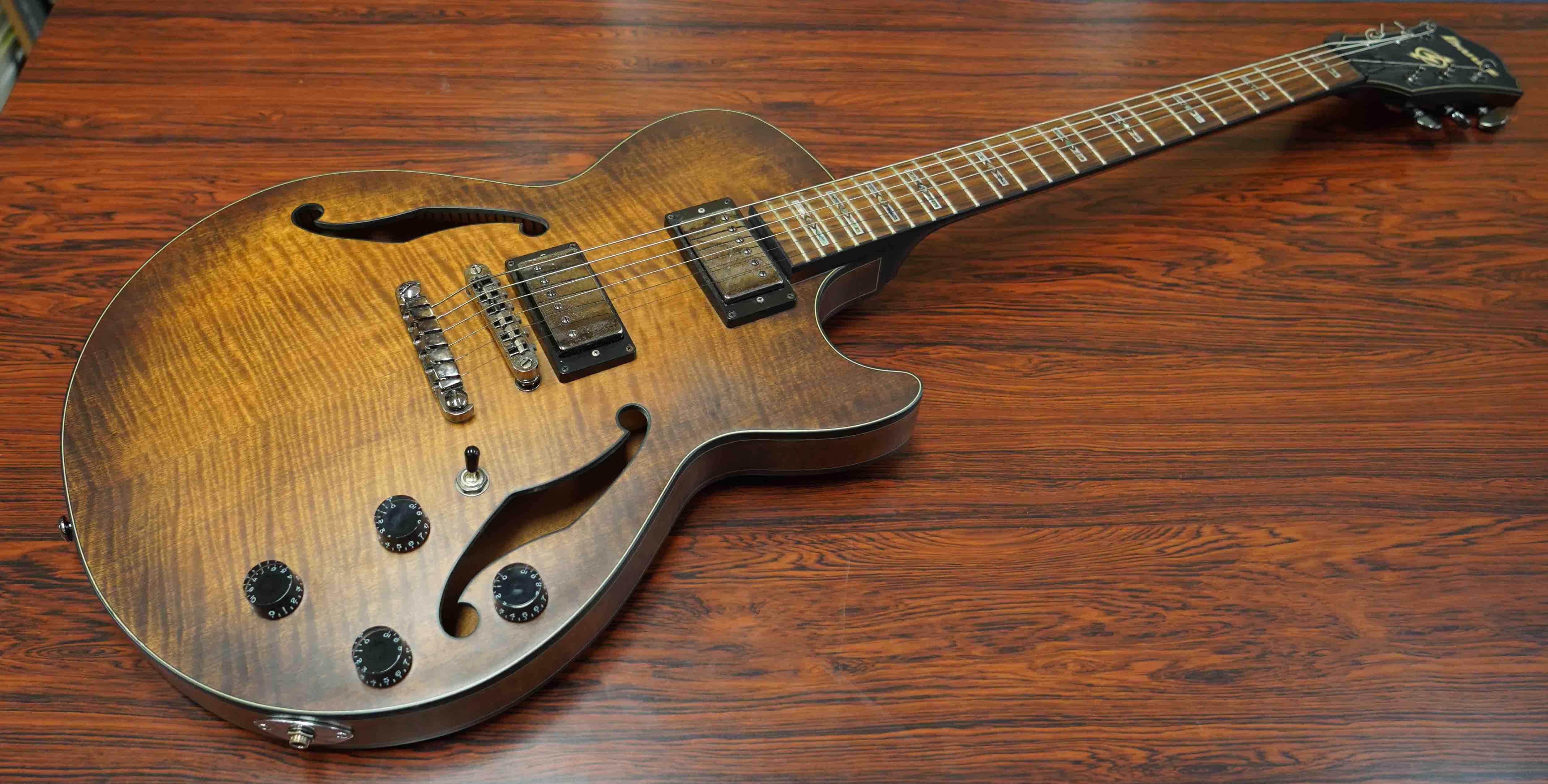 Mimesis as Make Believe: On the Foundations of the Representational Arts by Kendall Walton