A sign hangs on the door of Prof. Mitani's office. It was given to him by a student who graduated as a parting gift. It is carved and painted by hand.

Prof. Mitani specializes in food function at the Faculty of Agriculture. 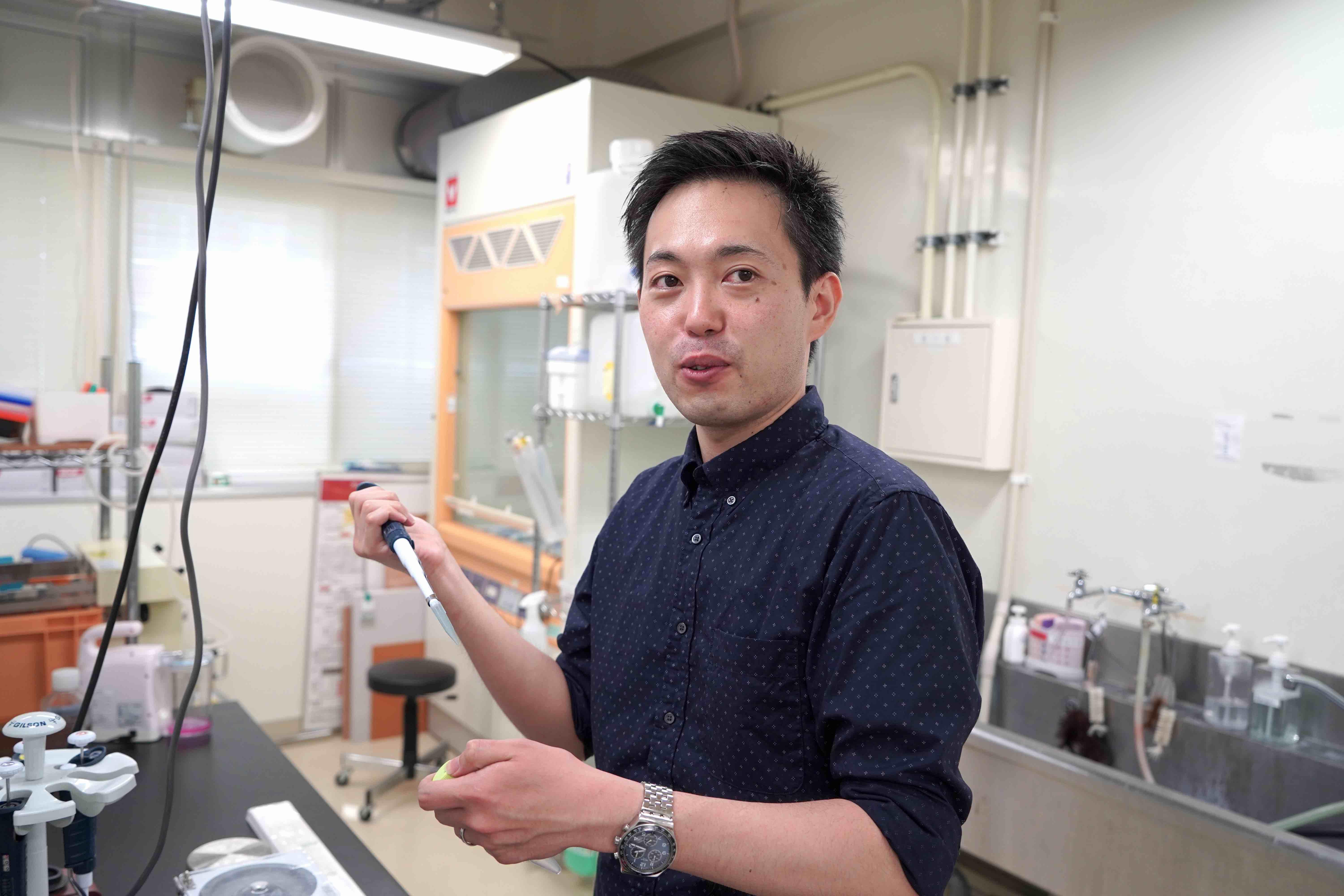 May I ask why you decided to become a researcher?

There are two reasons why I became a researcher. The first is that I entered the field of life sciences. When I was a high school student, I wanted to become a veterinarian and work at a zoo. However, my grades were not so good, so I applied to the field of applied biochemistry instead. When I first entered university, I gave up on my dream of becoming a veterinarian and had no idea what I wanted to do. Then one day, I was flipping through a biochemistry textbook during class or between breaks. What I came across was a method of genome analysis. The Human Genome Project completed when I was a high school student, and the world was bustling with excitement about the accomplishment. The analysis method of the genome (DNA nucleotide sequence) was described in detail, and I was surprised that it was a novel method but very logical. I was wondering how people who established the analysis technology discovered it. At that time, I was only vaguely thinking, "Wow!" But it was the moment when I first felt I want to work and be involved in finding such phenomena that humankind has not yet discovered. Research that gets awarded the Nobel Prize doesn't necessarily make a lot of money. However, its discovery is related to the development of humanity, and I wanted to contribute to the development of humanity, which led me to become a researcher. Perhaps I would not have conducted research in this way if I continued on the veterinary path.

The second reason I became a researcher is that my surrounding environment was right. When I was in the third year of university, I wondered which laboratory I should join to become a great researcher? The laboratory I chose was a very tough, hard-working laboratory. We were never praised, only scolded, but I found interest in research, little by little under difficult circumstances. That teacher, like me, would not go as far as to say wanted to win the Nobel Prize, but I feel that he wanted to make discoveries that would lead to the development of humanity and reveal the Truth, which matched my dreams and thus led me to improve.

What is your current specialty?

I study food functionalities. In Japan, people ask if I make functional foods when they find out I research food function studies. I don't do that at all. I'm doing research to clarify, on a molecular level, how each substance contained in food operates when taken up by cells. So, I've never thought about making a food product or anything like that. I'm doing a molecular mechanism analysis to clarify why a particular food is good for the body.

In my lab, we are researching fat. When too much lipid accumulates in fat cells, it can lead to obesity and diabetes. That is why I am studying food ingredients that suppress lipid accumulation in fat cells. First, we found that the bitterness component contained in cocoa beans has the function of suppressing the accumulation of lipids. Recently, I also found that the vitamin B3 metabolic pathway is important for the normal differentiation of adipocytes. When fat cells grow too large it leads to obesity, but if they do not differentiate to a certain extent, the hormone balance is lost, so normal differentiation is very important.

Would you please tell me about the rewarding aspects of your research? 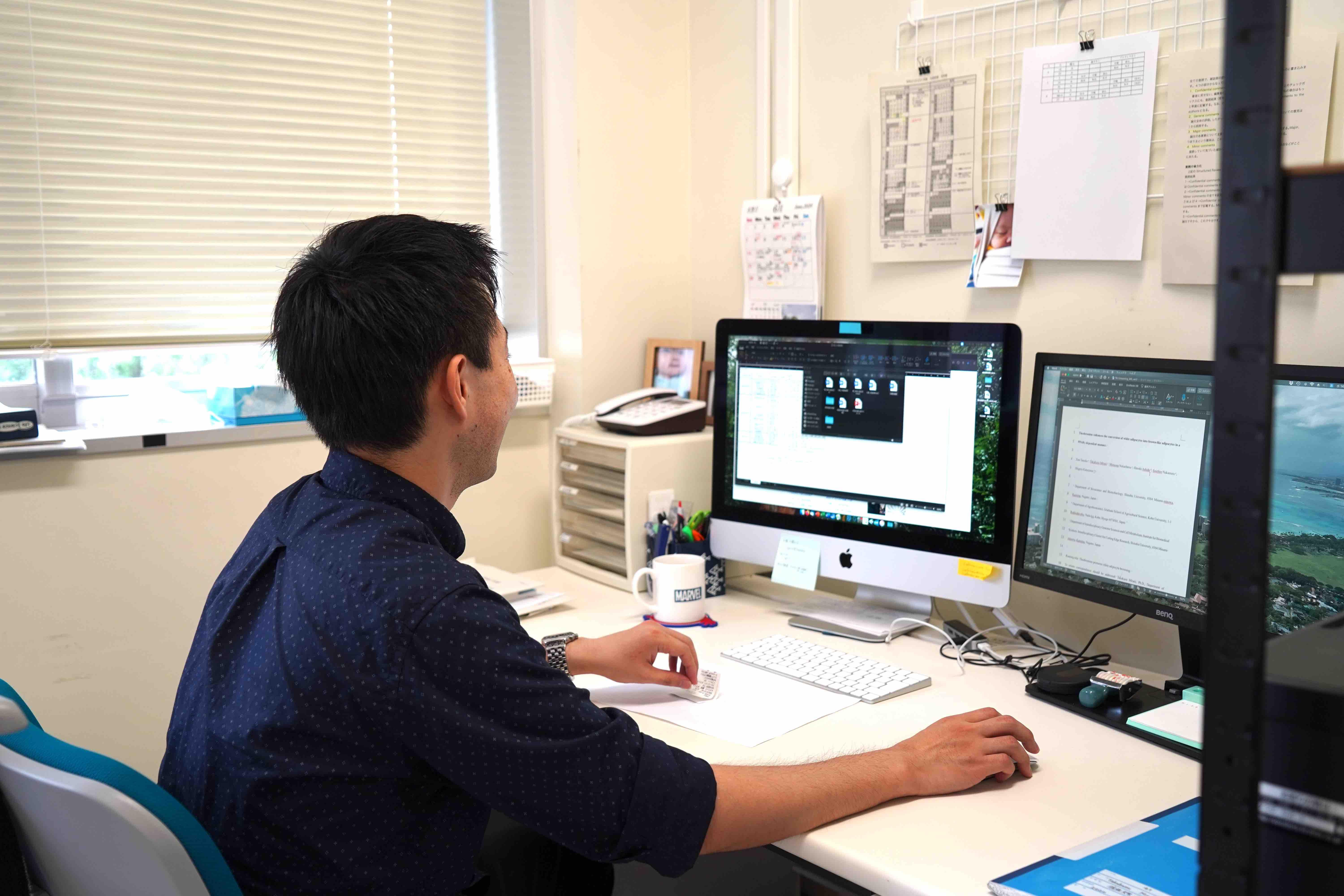 I think research can be difficult.

When I was a student or a postdoctoral researcher, I only needed to achieve good results for myself. All was well if I did well. But now, as a teacher, things cannot just be good for me. I have to train and bring out the best in the students. I have to educate the students, and I may want to do things a certain way, but students may have different ideas. There is a gap in the sensibilities between the teacher and the student, so sometimes there is difficulty in understanding each other to cooperate.

I often compare research to baseball batting. The batting average of the top professional Japanese baseball players is about 0.3. This means that the best players stand at the batter's box 10 times to get only 3 hits. Conversely, it means they were out 7 times. Researchers are the same. Even if you make 10 hypotheses, only 2 or 3 will work, and the remaining 7 will fail. I lose motivation if I fail 7 times, but I continue studying everyday because it is important to stand at the batter's box without giving up no matter how many times I fail.

Last year, I opened my laboratory independently and run it as its PI (principal investigator). Until then, I worked together with other researchers in other laboratories. I had a difficult time setting up the laboratory initially. At first, I didn't have any analytical equipment, so I asked other faculty to borrow theirs. Since then, the number of analytical instruments has been gradually added.

It is necessary to create an environment in which the students I teach can do research properly. To do so, I apply to many research grants because it is difficult to acquire grants. There are days when I can't conduct experiments and have to spend the whole day writing applications just to raise money. But if I don't have the funds, not only does it effect me but my students will be in trouble, so I write applications for research grants.

Could you show me three things that are important to you in the lab or your office?

1) I look for and purchase a Starbucks mug when going abroad or traveling. I have mugs from other cities at my house. I currently keep one at the office from Vancouver, where I attended an international conference. I always purchase one when I go abroad. I have one from South Korea, Chicago, and Hawaii where I went for vacation. It's not necessarily for a special occasion, but I buy them as souvenirs when I go somewhere for an academic conference because there are shops all over the world. 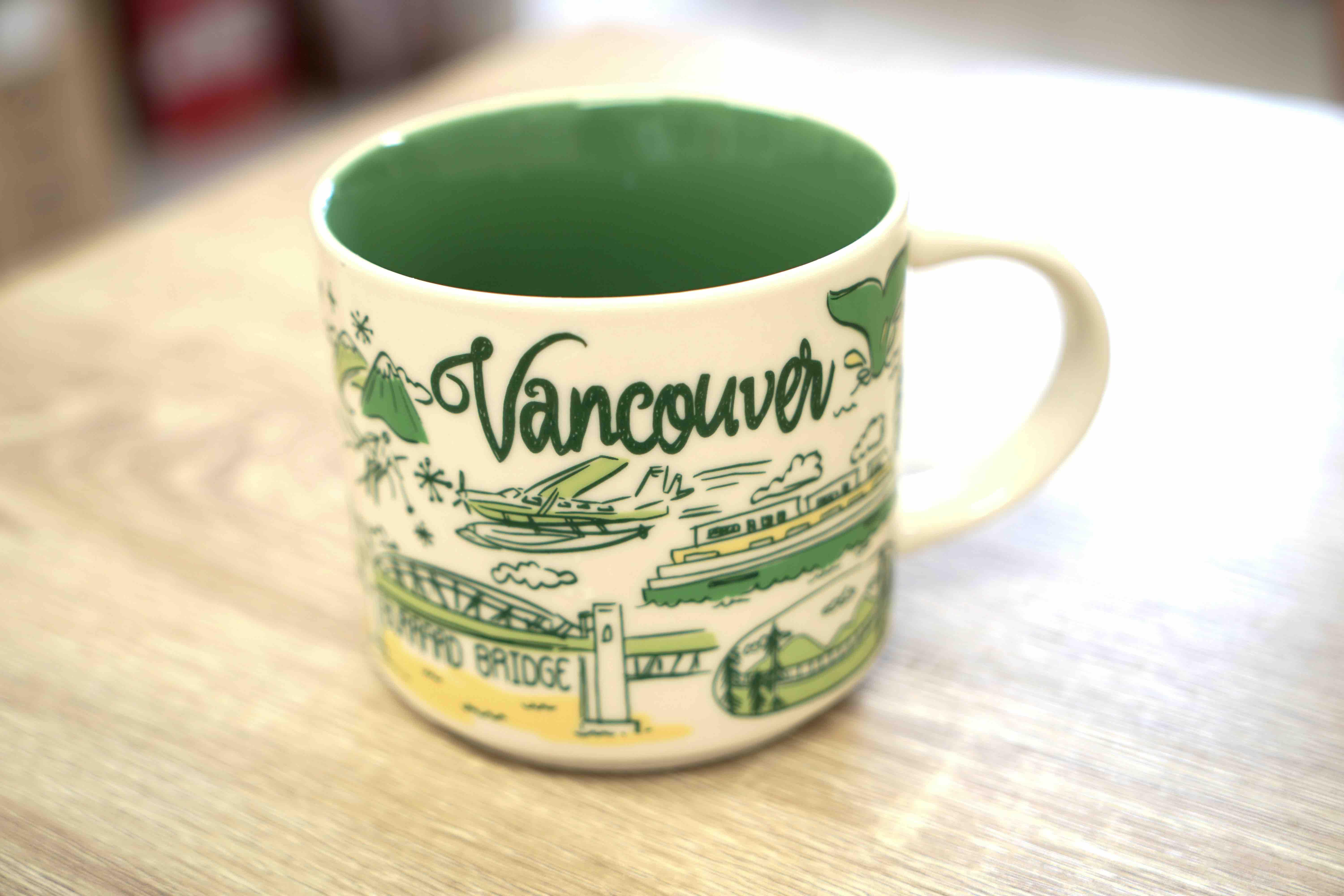 2) This sign hanging on my door was handmade by my first student who graduated in March 2020. He carved it by hand and colored it because I did not have a sign. I was happy to receive this gift.

3) This is a handmade tool I use in my experiments made from saran wrap roll that would otherwise be trash. I made it when I was a student, so it was 12 years ago. I think it's important to try to make your own tools rather than buying. Students buy things when they need something, but I think it's important to make them yourself first. I remember I got the idea to turn this saran wrap roll that was in the trash to hold tools used in experiments. It wasn't planned, but an idea that popped in my head, but fortunately the size was perfect and I use it still, till this day. In the past, researchers made their own instruments out of glass, so to think about building your own tool is important for researchers. 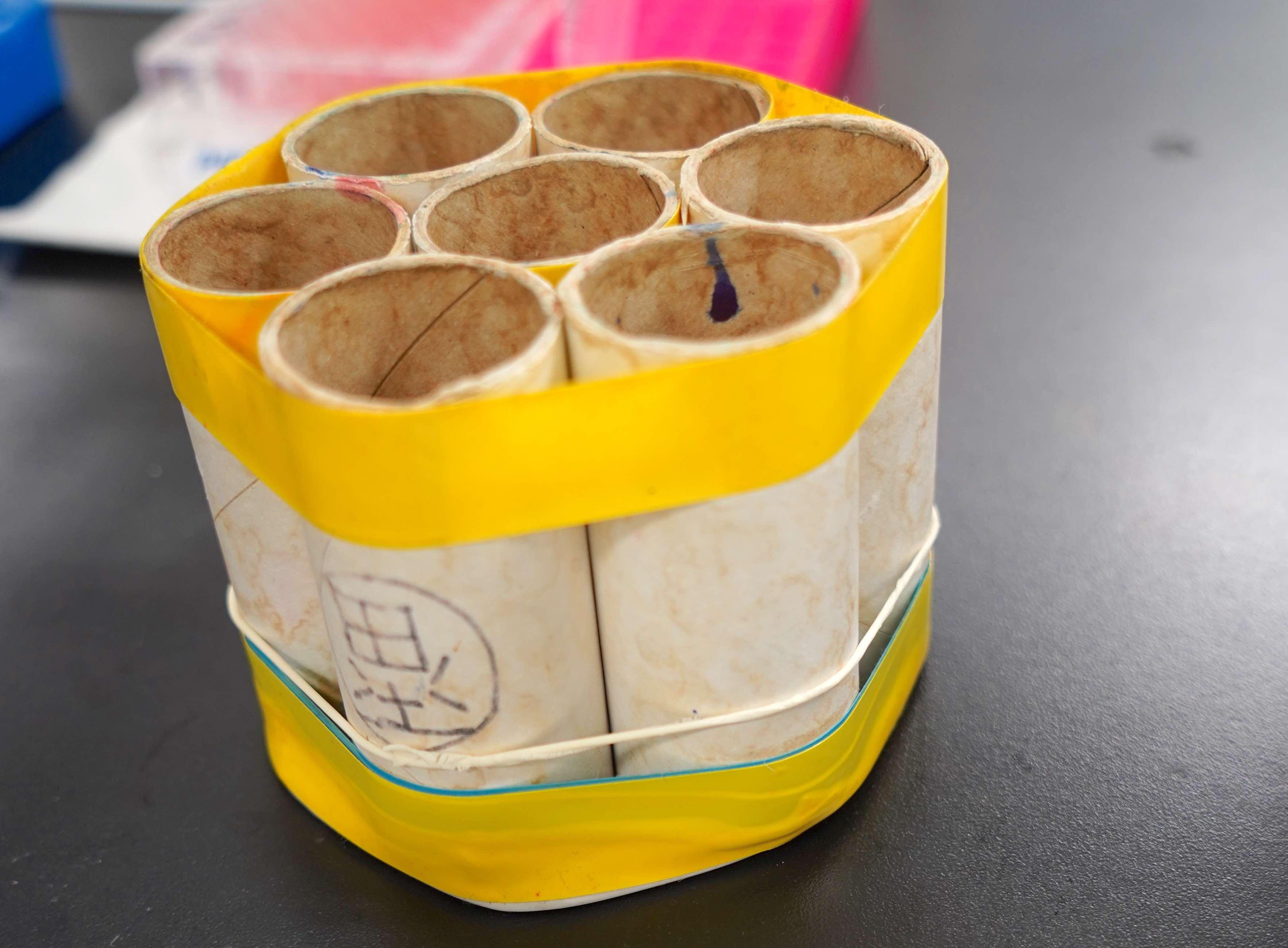 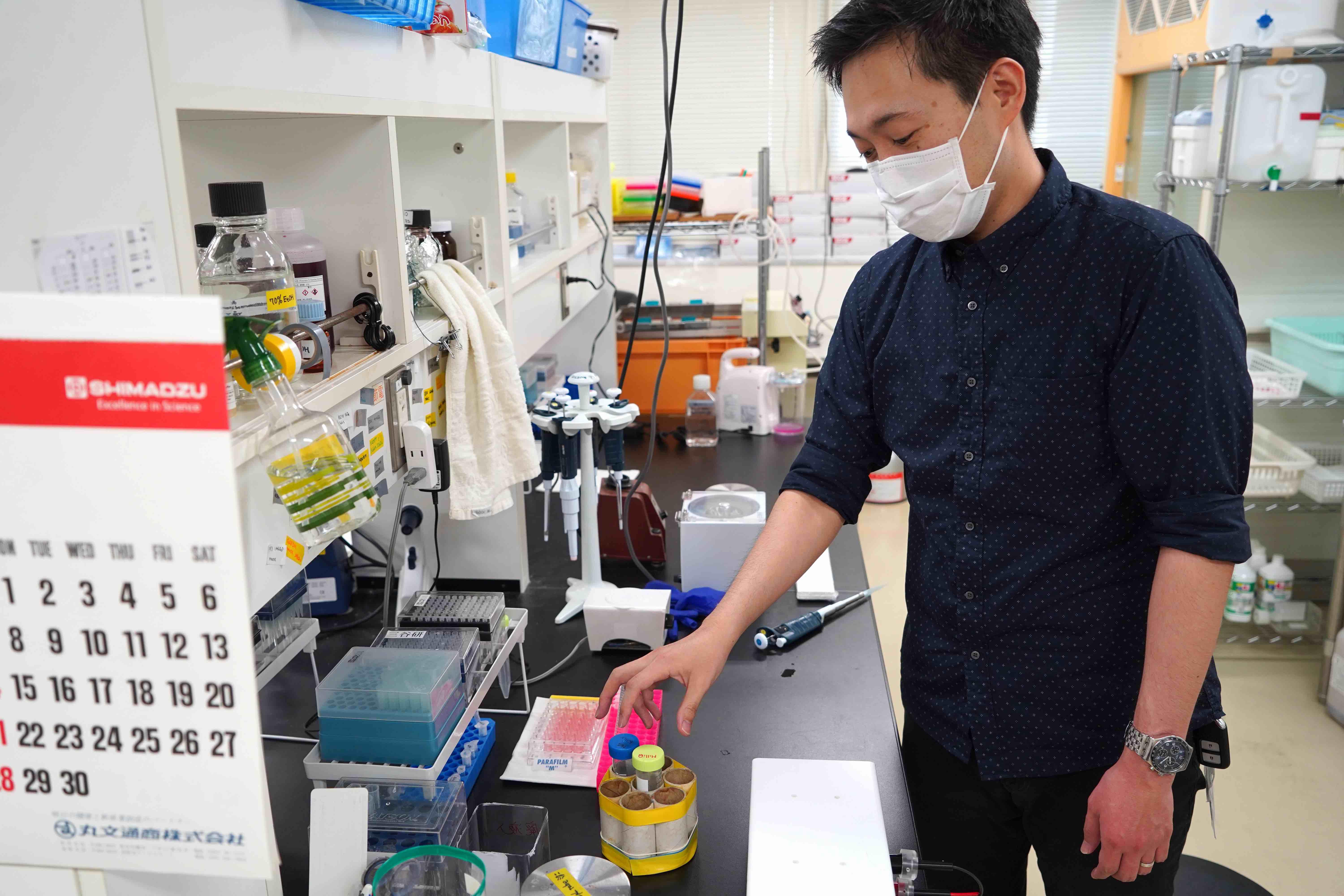 4) Researchers must publish and present their research results. So, I referred to Steve Jobs' book on presentations. When I was a student, I often read this book and used it as a reference for presentations at academic conferences. Steve Jobs practiced 100 times before presenting Apple products so I learned that it is important to work hard without fail.

I also read a lot of books by Uesugi Yozan, the leader during the Warring States period. He has a great ability to bring out the best in people. Show how it's done, explain it, and have the students do it. I want to be an educator like him. I hope he can be used as a reference to educate students. 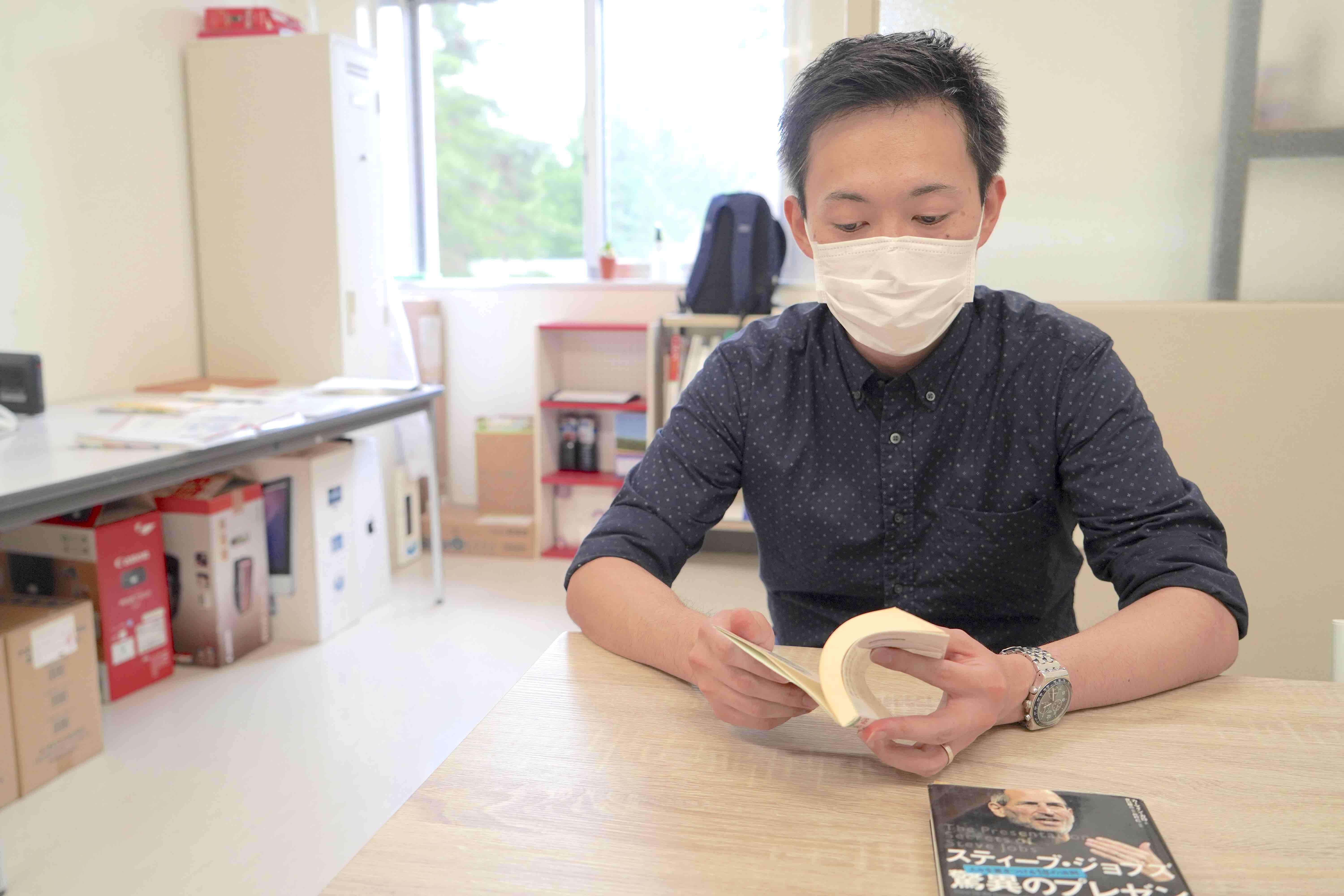 And finally, a message for students:

I want to tell high school and university students, that I think it is important to dream. When I ask Japanese students about their dreams, they often say, "I don't know, I don't have a dream." However, I think it is the dreams and desires that move people. It doesn't matter if you have a big dream or a small dream, but I would like you to work with a dream. Students coming to Japan from overseas may want to learn about Japanese technology. I would like you to have a dream and study at university to make it come true. 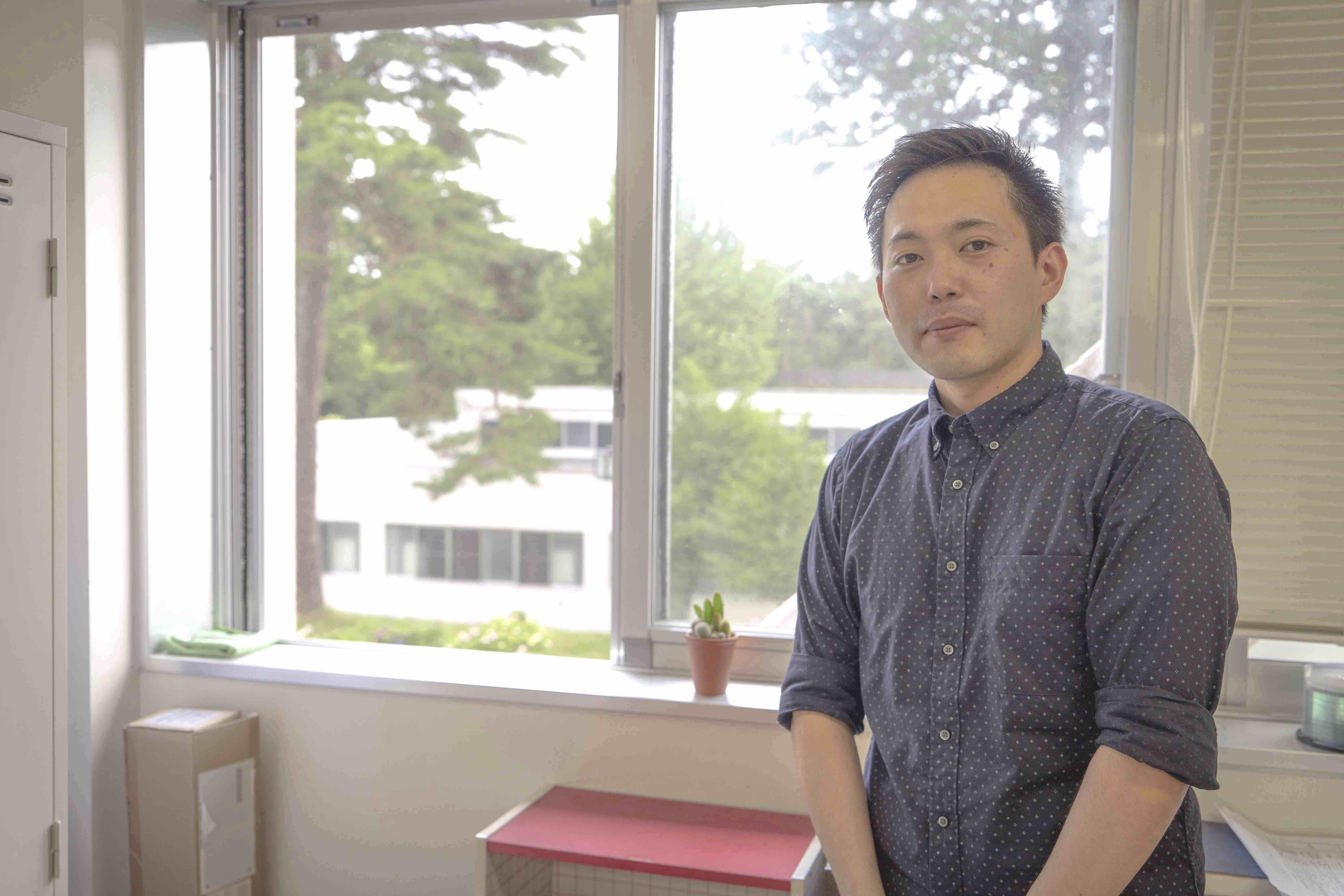 For more information on Prof. Mitani: