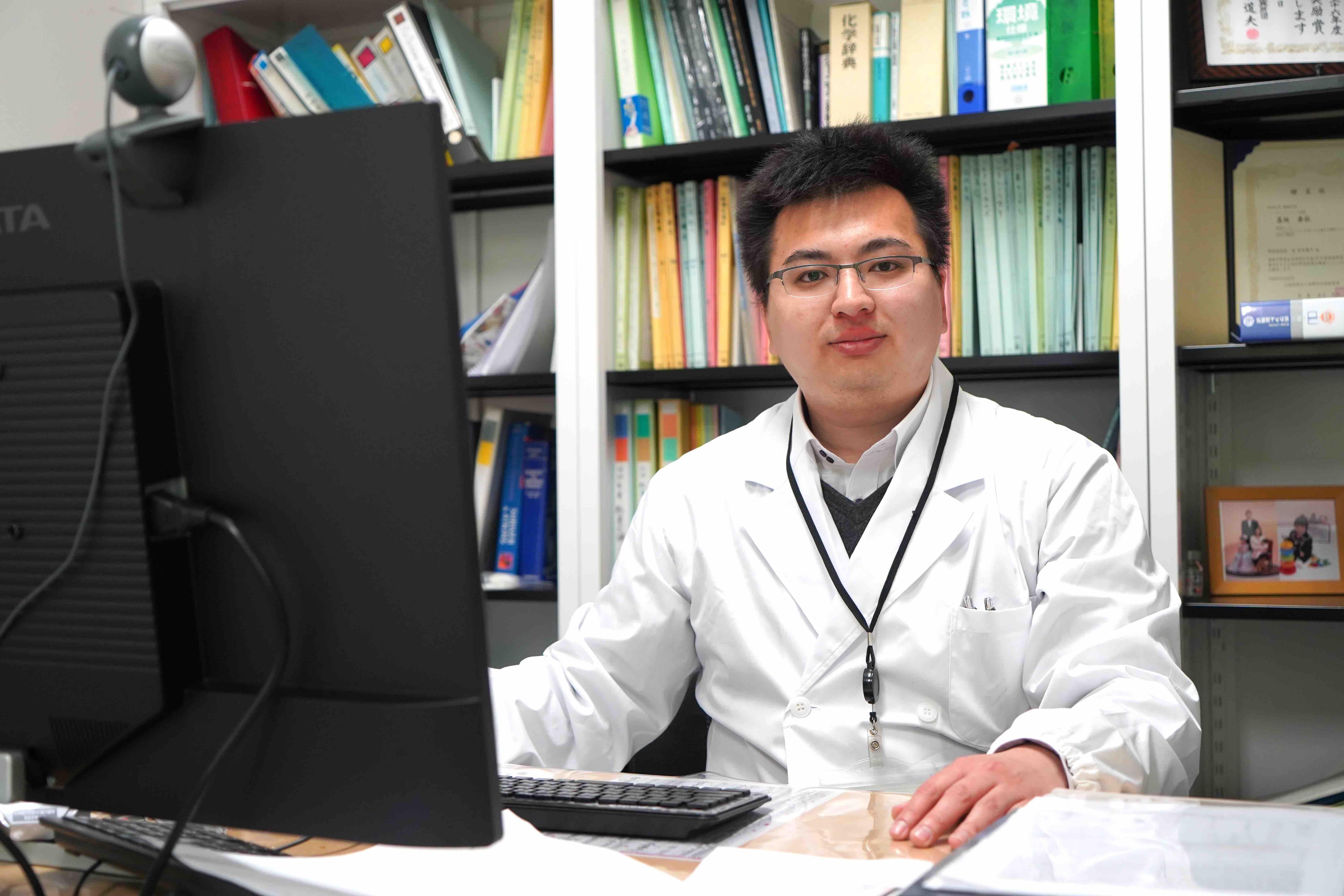 When did you decide to become an academic researcher?

I first dreamed of becoming a researcher when I was in elementary school. I was probably 10 years old. Though at the time, I was not interested in chemistry, but in astronomy. I was an elementary school student when Dr. Mamoru Mohri, the first astronaut from Japan went into space on the space shuttle. That is when I got interested in rockets and the universe. It was also around the time when I saw a beautiful and very bright comet Hyakutake, discovered by Mr. Yuji Hyakutake. So I dream of becoming an astronomer. I was also interested in history as a boy. I wanted to conduct archeological work on the pyramids of Egypt. TV shows often featured Professor Sakuji Yoshimura's archaeological team investigating the pyramids. All the same, my dream was to become a researcher.

When I entered junior high school, I visited the geology and astronomy club at the school. Unfortunately, the atmosphere was not a good match for me. Then, my classmate who was seated next to me in class invited me to join the chemistry research club. I never imagined then of course that I would become a professional chemist, although I liked chemistry. This was the first introduction I had to chemistry research. This chemistry club performed several research projects that was at a high level for junior high school students. For example, upper classmen in my club studied the synthesis of biodegradable plastics that decompose to soil by bacteria. This topic is still hot, cutting-edge and my current group has projects investigating it. Anyway, I wished to join the plastic research team, but I lost the game of rock-paper-scissors to decide who can join and was allocated to glass research team. Nevertheless, my interest in plastics remained.

Later on, in the year 2000, Professor Hideki Shirakawa won the Nobel Prize in Chemistry. He was a member of an international pioneering team that developed electron-conductive plastics. I was in the first grade in high school and agonizing over my career plan. Astronomy or chemistry? That was the question, again. So when I heard the news of Professor Shirakawa's Nobel Prize, it strongly encouraged me to become a professional researcher dealing with plastics. So I entered the Department of Polymer Engineering at Tokyo Tech. After that, as you know, I became a professor in polymer science.

You were thinking about becoming a researcher since early childhood.

Yes, I enjoyed experiments and scientific encyclopedias. To learn and understand something previously unknown is always exciting and joyful for me. Research always seeks to better understand the unknown. There are no certain answers. I attempt to solve the issue myself and discover a new phenomenon. That is a lot of fun. Because I had experienced what research is and knew how fun it was, I was sure that this was the most suitable job for me.

You have been conducting research since junior high and high school.

Well, my research topic then and thesis was about glass. Surely, the decision to aspire to become a plastic engineer and a polymer scientist is attributed to Prof. Shirakawa's Nobel Prize. I had previously learned that plastics cannot conduct electricity, but he changed this commonly understood principle. This had great impact. Such electro-conductive plastics are now essential for touch displays and smart phones. I had not known such facts and it gave me great surprise that plastics plays an important role in our daily life. Does it not interest you too?

There was another event that inspired me. I read a leaflet introducing how polymer science contributes to our technologies that left a strong impression on me. I mentioned I was a member of the chemistry club. One day, I was waiting outside while the chemistry lab was being cleaned. The lab was designed not only for our club but also served as a classroom for other students. That was when I came across a leaflet in front of our lab. It showcased the cutting-edge issues in polymer science and engineering through real-life examples, such as racing car tires in Formula One Grand Prix. Races are made possible with the latest rubber engineering technology. It was full of information on items such as biodegradable and renewable plastics for a sustainable society, hydrogels that fight against desertification, and so on. Speaking of fiber technology to which faculty I belong, fireman's uniforms are made of non-flammable textiles, carbon fibers are used for very high-strength materials, and medical filters are used for dialysis. These topics left a big impression on me. So reading the pamphlet while waiting for the lab to be cleaned also encouraged me. Space science was attractive, but I thought polymer science could contribute more to our daily lives. It was not only for my own satisfaction but for improvement and convenience of human life. The environmental social problems could be solved with polymer science. I felt it is exciting, that is why I entered the Department of Polymer Engineering.

I am impressed how you set your sight on a big dream so young and realized it without detours or doubts.

My classmates from high school also say so, even now, because I had professed to be a researcher. My friends have never said, "I've never imagined that you would become a chemist". They say, "of course you did!" Someone asked me why I didn't think of another profession, but I always liked science and never changed my mind.

You did not waiver.

No, people have told me I set a goal and work to achieve it.

But there were some road bumps along the way?

Because I am professional researcher, I have always struggled to secure a budget for my research. However, let me speak on situations that reflect directly on research. Difficult times are when I cannot get the expected results after many trials of experiments. For example, the literature says, "this experiment is very simple". However, I cannot reproduce the authors' results myself. Why? Is it my poor technique? Is the paper incorrect? Or is there a trivial but important key that is not described there? Such unproductive experiments are dull and boring. If I knew the reason why I can't, it would be better. The worst is just struggling without any answers.

I have an unforgettable memory from when I was a graduate student. When I was in the second grade in the master course, I attempted a synthetic experiment. I can do it easily now. However, I did not have enough information on how to reproduce the experiment written in the paper. In our field, some standard techniques are often omitted from academic reports. But my group did not have such standard techniques in the field. I repeated a variation of this same experiment MANY times over the next two years! It was just a sequence of trial and errors. Changing raw materials, solvents, glassware... I got plenty of advice from numerous researchers. Even so, no expected results. It was tough. Nevertheless, I enjoyed experiments so I never considered giving up. Furthermore, the results were not the worst and included small successes. It was not 100% successful but 85%, and left me feeling I was close to the goal! Don't you think it's valuable to continue? It took me two years to achieve my target, though most of that time I was conducting other experiments.

How did you overcome the problem?

The answer was very simple. I found a similar reaction on my friend's poster presented at a symposium.

I asked him: "Can you prepare the product in such a way?"

He said,"Yes, I imagine my current approach is better than the one you are attempting, described in the older paper."

I immediately asked him for a copy of his paper and everything became clear. It turned up trumps, when I got a little hint.

With this solution, I could advance my plan to a furthermore. Finally, I reported my results in one of the most authoritative journals in chemistry. My achievements and discovery led to further projects by my junior colleagues. So I've been satisfied, and happy I kept going even after such difficulties. For me, this experience affected me deeply. Thus, my students at Shinshu University perform similar experiments even now. Of course, the purpose and role are different from my previous work. The experiments have been improved with my growing technique and experiences, but the origin of the reaction and principles are the same. 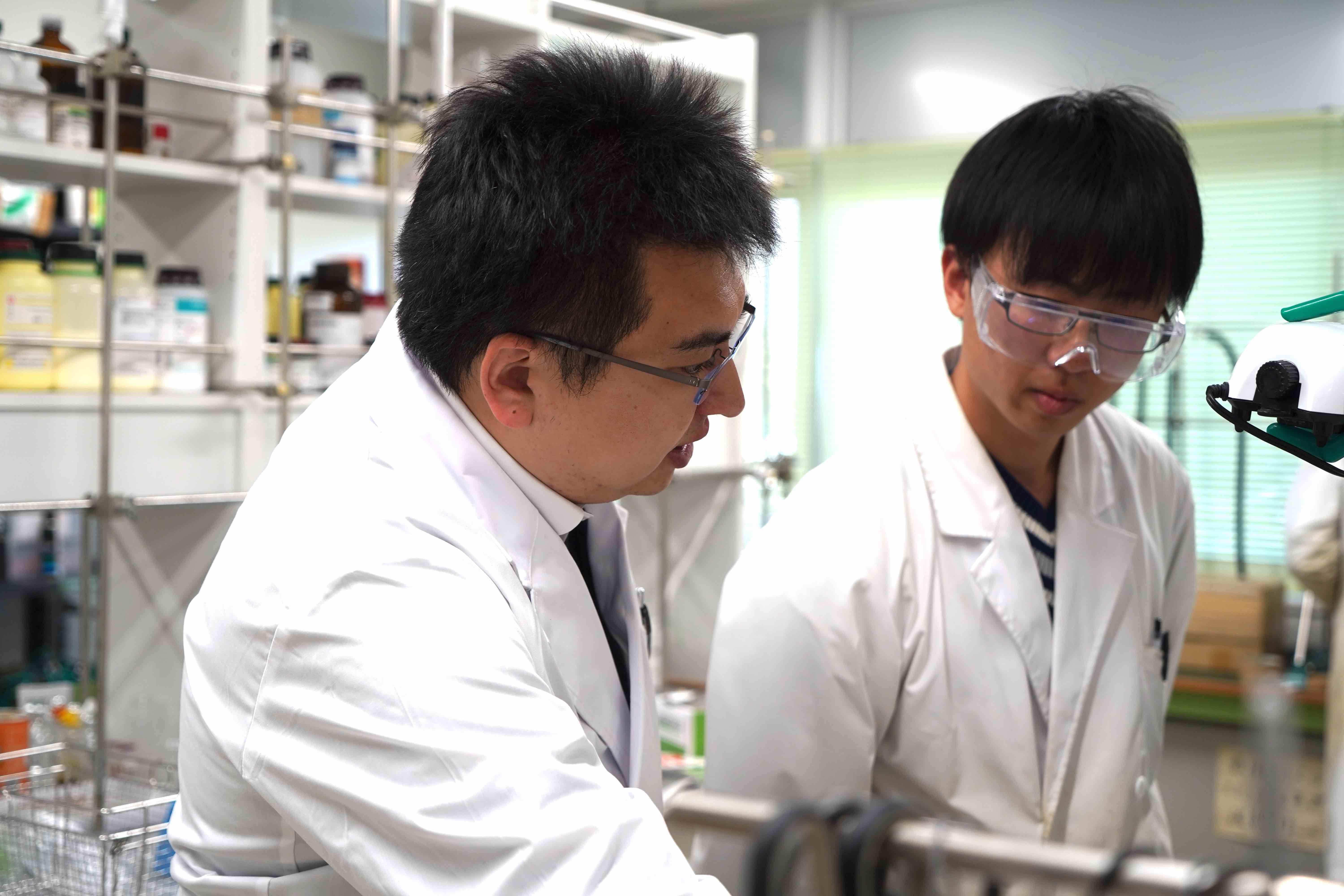 When do you enjoy your work most?

I can think of many occasions... but the best is the moment when I find something strange but interesting. Such moments occur once in about five years. For example, common chemicals dissolves in water in higher concentrations at higher temperatures as you are probably aware, like sugars and salts in warmer water. Contradictory to that common notion, my polymer suddenly became insoluble above a certain temperature. Some polymers exhibit such properties, and I expected this result, but it was just a hypothesis. The polymer was an unknown substance so I had to examine the behaviors myself. The polymer was synthesized in hot water. The reaction mixture of raw materials was a transparent solution at the initial stage, but it became cloudy! Furthermore, it became transparent again after cooling to room temperature. That's when polymers insoluble in hot water but soluble in cold water was observed. Expectation became truth. Such findings are always very exiting!

Recently, I prepared a degradable polymer that would contribute to a solution for environmental problems. To be honest, all degradable polymers I developed I did not initially design as such but were happy accidents. One of them was anticipated to give high-performance properties after a chemical reaction. However, the signals indicating the existence of the polymer disappeared after the reaction. My student who employed the experiment was disappointed professing, "My polymer was lost..." But for me, this was a surprise as I never expected the possibility of total decomposition. It was based on new mechanism and unbelievable. I said to my student, "it's not a failure but a great discovery!!" Now, this discovery has been evaluated highly in my field. A moment to encounter such serendipity is also exiting. Of course, expected results are also welcome, as I design my macromolecules according to specific reasoning. A discovery of unexpected, extraordinary events of molecules I designed is also very exciting.

Unexpected results and outcomes are not limited to scientific discovery. I have received contact from researchers overseas after I report my results in international academic journals. Recently, I received feedback like "your work is very interesting" and "I have a similar idea to yours, let's collaborate!" So research facilitates a connection to researchers I have never met or I may discover to be pondering the same questions of pioneers some of who may already be deceased. This is also a fun aspect of research.

That is difficult to answer... I have so many. I am interested in novel raw materials of macromolecules and their chemical reactions as well as the application to polymer synthesis and degradation. It's fundamental principle and phenomena. These past five years has given me enough information about them, and I have new interests on their application to material science. They are for self-healing materials that can recover spontaneously even after damaged and variable plastics soft to be transformed but suddenly become hard with some stimuli. The initial fundamental research gave me such perspective for the future. I would like to contribute to the construction of sustainable societies with my discovery and its hybridization with natural polymers like polysaccharides.

Can you show us some of your favorite books and instruments? 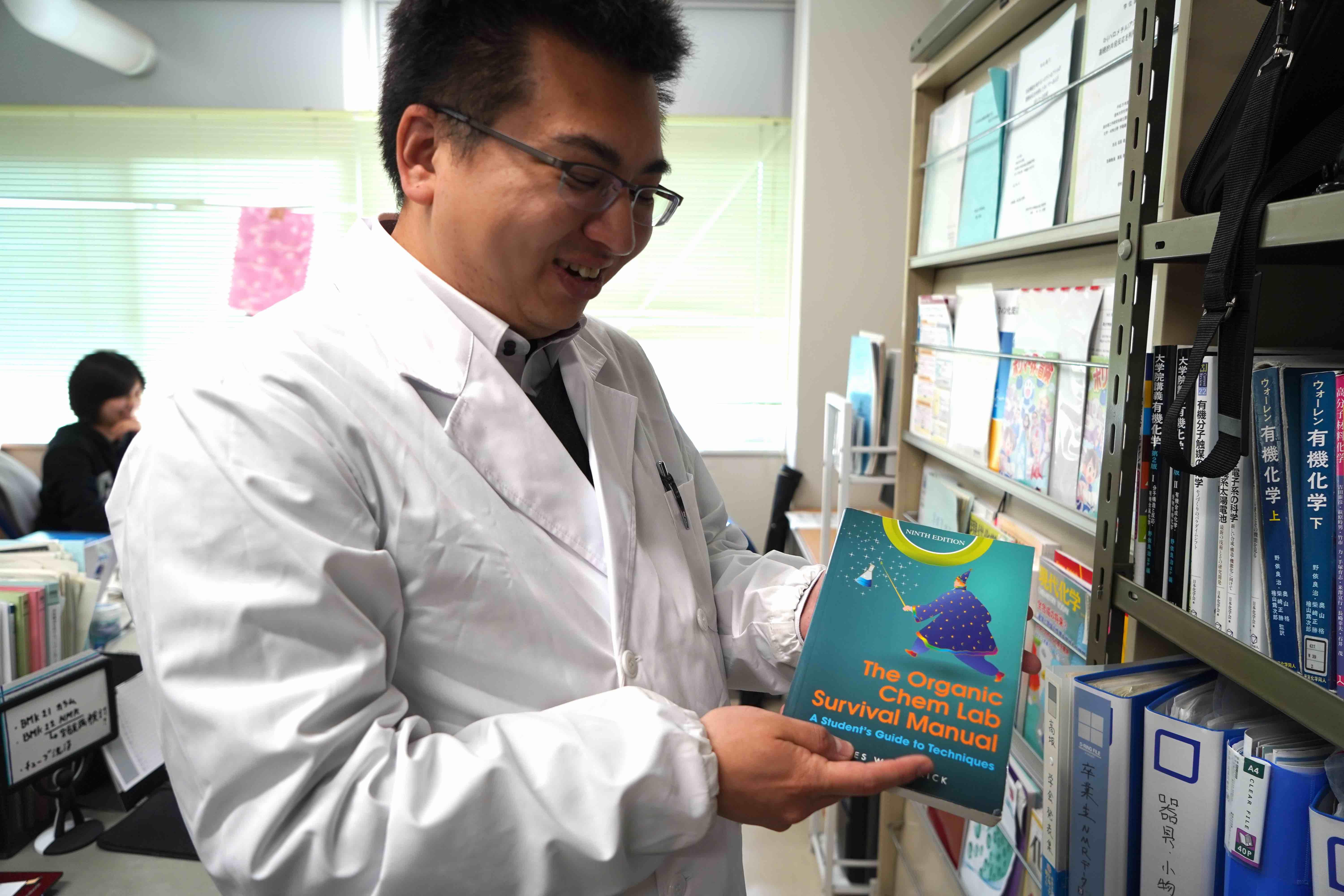 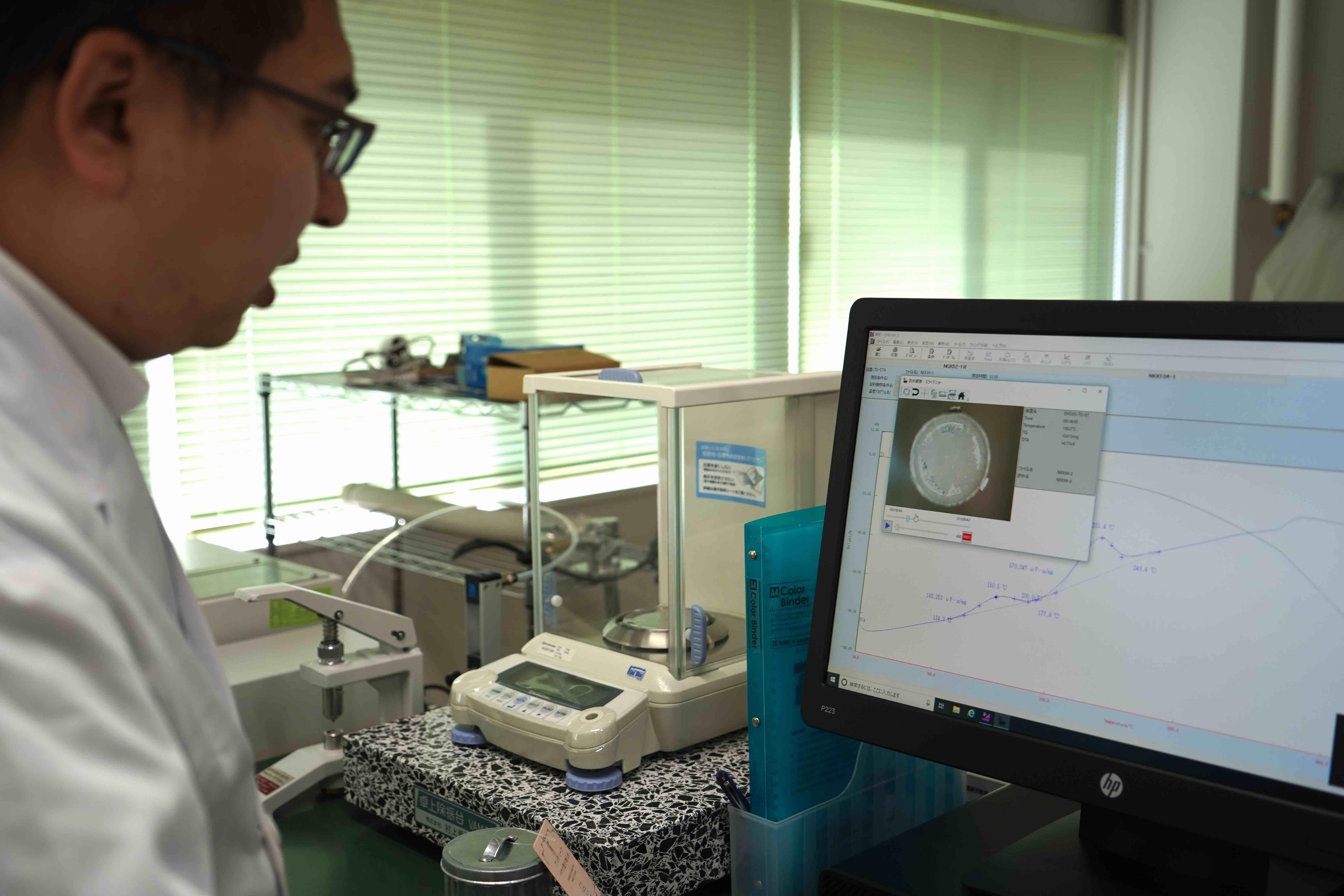 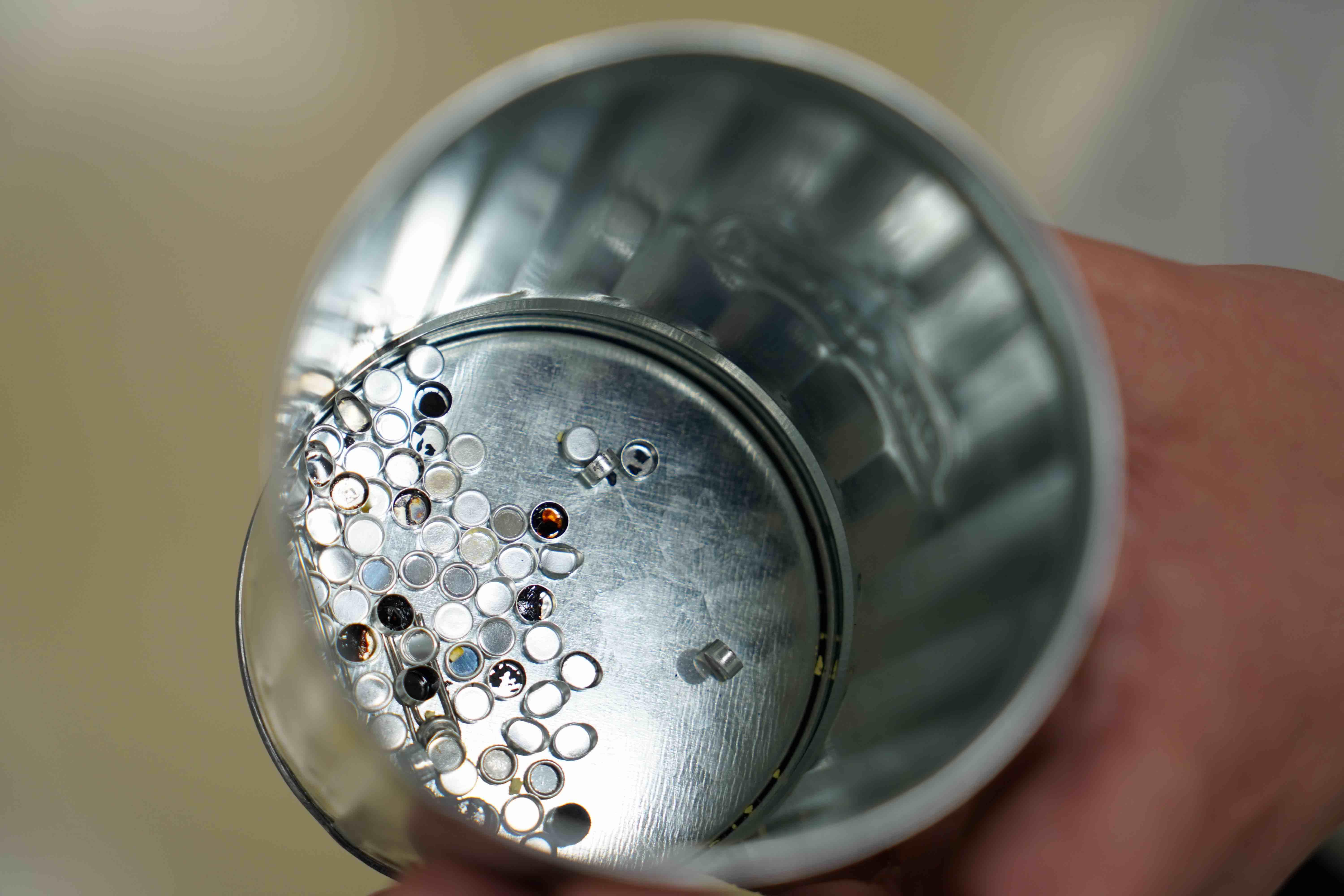 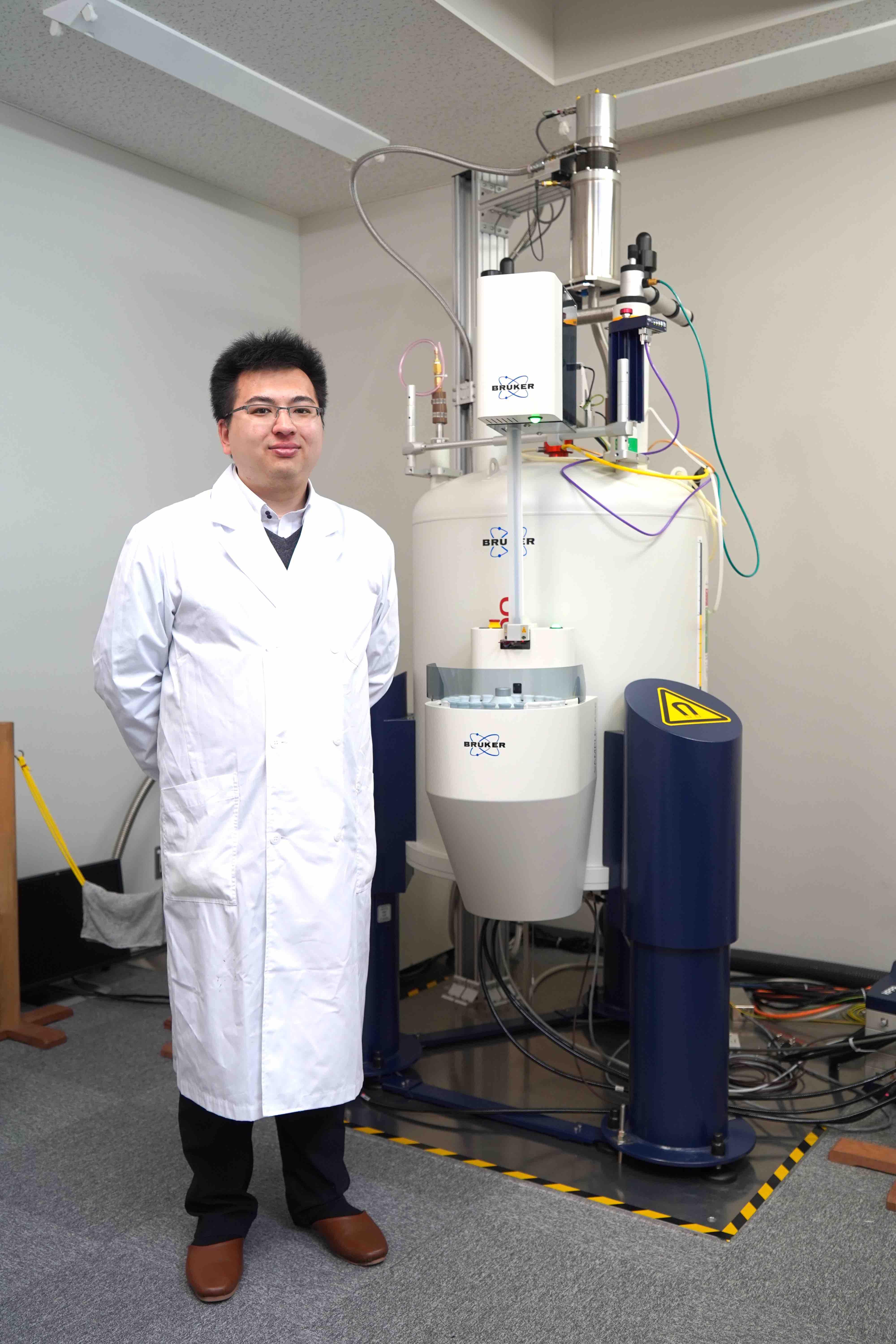