Discovery of a pathological mechanism regarding a neurodevelopmental disorder affecting women

The research team first noticed that calcium/calmodulin-dependent serine protein kinase (CASK), a causative gene of MICPCH Syndrome, was located on the X chromosome and produced a female mouse that had CASK on only one of the two X chromosomes by gene manipulation. In female mouse brains, inactivation of the X chromosome resulted in a mixture of nerve cells that did or did not produce CASK (Figure B). Nerve cells communicate with neighboring neurons by means of two kinds of synapses: excitatory and inhibitory. Both synapse types are necessary for the brain to work properly. In neurons without CASK expression, the number of excitatory synapses was seen to increase while the number of inhibitory synapses decreased (Figure C). This abnormality was not observed when normal synapses were examined. The research team finally identified that the abnormal synapses were caused by the reduced expression of a neurotransmitter receptor called GluN2B.

This important study clarified the pathological pathway of a neurodevelopmental disorder caused by X-chromosome inactivation. Since such neural diseases as mental retardation, epilepsy, schizophrenia, and autism are thought to be closely related to synapse function abnormalities, the results of this investigation is expected to markedly impact future strategies in disease treatment. 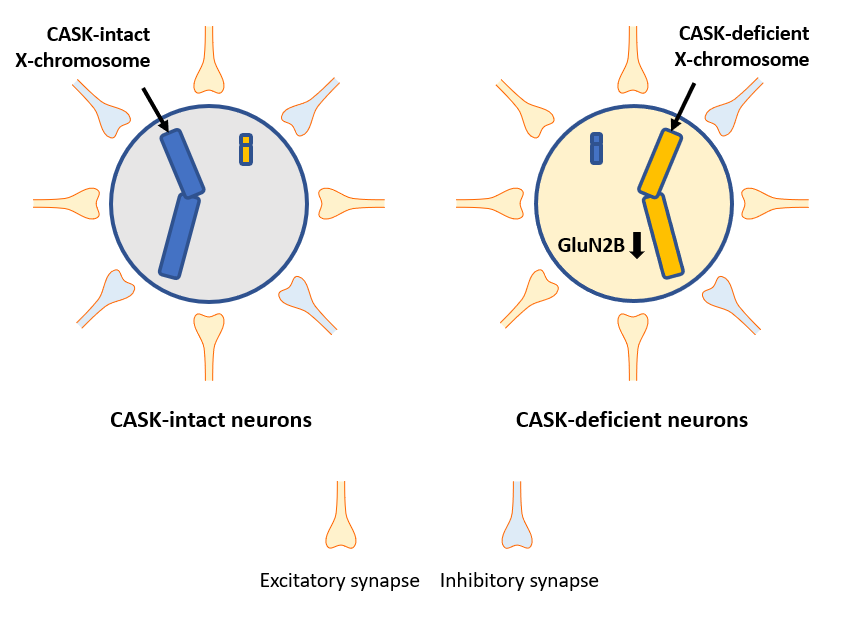