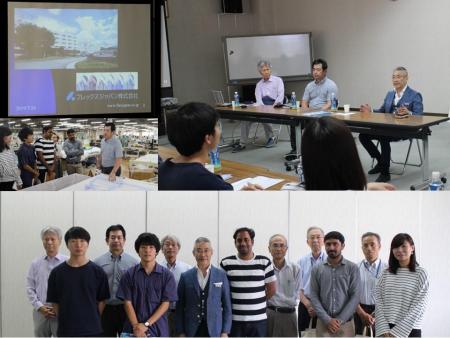 On July 24, five students (four first-year students and one second-year student) joined five instructors on a visit to Flex Japan Inc. in the city of Chikuma, Nagano Prefecture, as part of the Practical Study in Textile Fundamentals course. At the company, a manufacturer of dress shirts that was founded 70 years ago, students toured the plant with Foreman Oyama and then participated in a round-table discussion with President Yajima, who spoke not only about the company's approach to manufacturing and marketing but also his philosophy with regard to training engineers in Japan. We would like to take this opportunity to thank President Yajima, Foreman Oyama, and everyone else at Flex Japan who made the visit a success.

Student participation report by Tsukasa Sekizaki
1. Purpose
During the plant tour at Flex Japan, a successful manufacturer of dress shirts, and subsequent round-table with the president, we learned about current conditions in the textile industry, the company's approach to developing internal mechanisms (for example, how it works to improve the labor environment and launch new businesses), and the perspective of top management. We will be able to take advantage of the lessons learned in our future research and design activities.
2. Issues identified through participation
One often hears about the unique issues faced by medium and small enterprises (for example, how reliance on machines for everything means being outcompeted by larger, better-capitalized companies). However, we had not had an opportunity to actually talk with a corporate manager in the past. It was a very informative experience.
3. Lessons learned
I believe that the plant's production system was similar to the Toyota Production System, which we studied the other day at MOT (for example, in terms of how small quantities of materials are divided and used to complete multiple stages in order to minimize inventory, and how multi-trained workers a carry out a variety of manufacturing processes). It was a valuable experience because we rarely get to see what we learn in the classroom being put into practice in the field. Additionally, I gained a new understanding of how Japanese workers are uniquely skilled at performing tasks that are difficult to mechanize (for example, work requiring visual inspections and skills).
4. How the lessons learned can be utilized in future research
The lessons of the experience involve thinking processes, rather than methods that can be put to use directly in research. I was particularly impressed to hear how the company threw out fixed ideas about what a dress shirt should be and embraced polyester, a material that had been used primarily for sports apparel, to take advantage of the "cool business" trend in Japan, indicating the paramount importance of design. I also felt that I would be able to utilize the approach of rethinking things that are taken too much for granted as a way to think about things from a variety of perspectives, for example by asking why people wear clothing in the first place, in my future research.